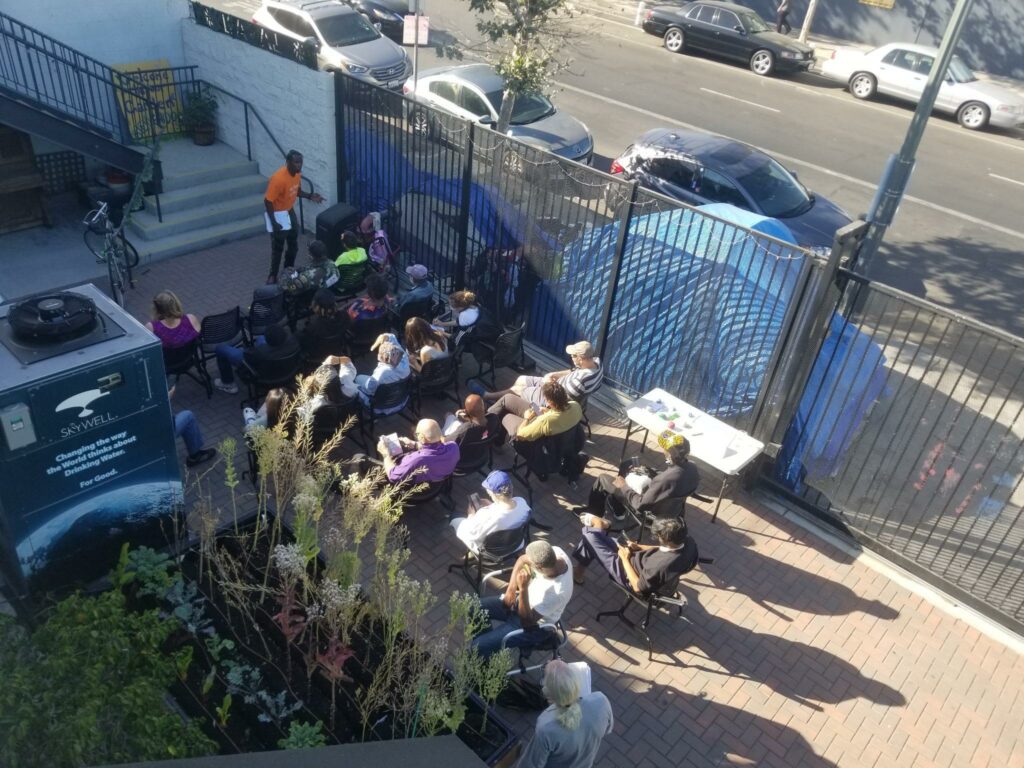 On Friday (6/17), the Coalition supported LA CAN’s Resident Organizing Committee (ROC) meeting. ROC meetings are a regularly held meeting where Skid Row community members and other LA community members can come together to fight back against the state’s war against the poor. General Dogon led a discussion on the state’s recent efforts to pass a CARE Courts. The falsely named Community Assistance, Recovery & Empowerment (CARE) Court is an upcoming means of criminalizing mental illness, specifically aimed at targeting unhoused individuals dealing with mental illness, through the imposition of conservatorships. The CARE Courts bill is flying through the legislative process and we’re working together with LA CAN to build power against this new means of criminalization.

The Coalition also presented meeting attendees with a draft of an upcoming letter we will release condemning plans by the Los Angeles Board of Police Commissioners to establish a Community Police Advisory Board (CPAB) to “oversee” LAPD technology. The Coalition continues to reject any notion of police oversight. We know this most recent CPAB is just another attempt by the LAPD to placate demands for the defunding and abolition of policing so that they can continue their campaign of control through racial violence.

We also took time during the ROC meeting to honor a long-time LA CAN organizer and ferocious freedom fighter, Kei! LA CAN members took turns showering Kei with praise for his unending dedication to our collective liberation.

On Monday (6/19), we held our monthly Data Driven Policing meeting where we come together to review the work we’ve been doing in our varying work groups. Our coordinating team member, Tiff, also facilitated the planning of our upcoming webinar.

On Tuesday (6/20), we held another of our regular SARA outreach sessions with our friends from the Lotus Collective. The Coalition engaged the local community in conversation about our work dismantling the LAPD surveillance state. Our focus in recent conversations has been on nearby SARA locations and the increased surveillance and police interaction that follows the designation of a site as a SARA location. Our partners at the Lotus Collective were present to distribute harm reduction resources.

That evening we held our monthly general meeting. This month’s topic is Public Health: Upholding Policing, Surveillance, and Global Carcerality . We discussed public health and how its uses could vary with social justice implications. Jamie Garcia, Bita Amani, Lisa Patrick Mudd, Mienah Sharif, and Breann McAndrew led our collective conversation and showed participants how to use public health tools to stay safe from the long-term impacts of covid-19.  Lastly, we unveiled our new Public Health work group which is critically unpacking public health tools and strategies that uphold white supremacy locally and globally.

If you or your organization are interested in hosting a teach-in or discussion regarding our report please fill out this google form.