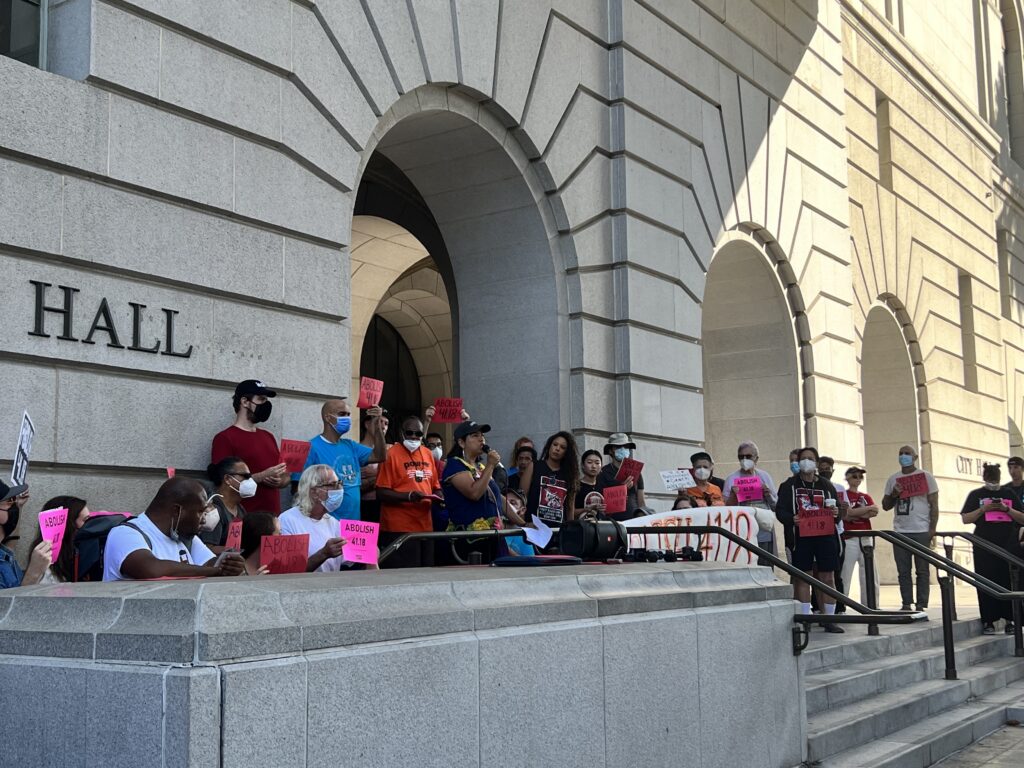 This past Monday (8/8) the Coalition supported a Street Watch action called “BIKE REPAIR CITY!”, a one day creative action and protest against the criminalization of Bike repairs, that will target Black poor and low income communities, unhoused people, street vendors, youth and more. The Coalition talked about how this law is an evolution of the repeatedly debunked “Broken Windows” policing model, the same policing that was used to criminalize unhoused community members in Skid Row through the notoriously violent Safer Cities Initiative. We also uplifted how these citations are an opportunity for law enforcement to gather information to criminalize community members in the future.

On Tuesday (8/9) we were back in City Council with LA CAN and the Services not Sweeps Coalition continuing to demand that City Council repeal Municipal Code 41.18. You can catch a snippet of our press conference before Tuesday’s vote here. Unsurprisingly, City Council voted to expand the criminalization of unhoused people. However, we continue to fight.

Later that evening, the War on Youth held our monthly webinar where we celebrated Black August, a month in which we honor incarcerated Black freedom fighters and their legacy of resistance that continues today. We were joined by Harold Welton, a former SNCC organizer and Southern California Chapter Black Panther member, to talk about the historical targeting of youth at the forefront of revolutionary work and the importance of education in revolutionary work. Harold also talked about the Coalition to Free Ruchelle Magee, and the steps we can take to help free the long incarcerated freedom fighter.

On Wednesday (8/10) the Coalition held our monthly Coordinating Team meeting. This meeting is an opportunity for the decision making body of the Stop LAPD Coalition, to come together and get updates on the state of each fight.

On Thursday (8/11) morning, the Coalition supported a rally held by our comrades at the Palestinian Youth Movement, honoring the recently fallen martyrs who died in resistance of Zionist forces. The action was held in front of the Zionist Consulate. The speakers from the Palestinian Youth Movement and Students for Justice in Palestine at UCLA honored the enduring struggle against Zionist occupation in Palestine.

On Friday (8/12) we were back in City Hall where the city council was voting on LAPD’s streamlined use of equipment policy. This policy would facilitate the expansion of LAPD’s military and surveillance arsenal. After preventing us from speaking on the agenda item, the council rushed the policy through. You can catch Hamid Khan’s public comment from the meeting here.