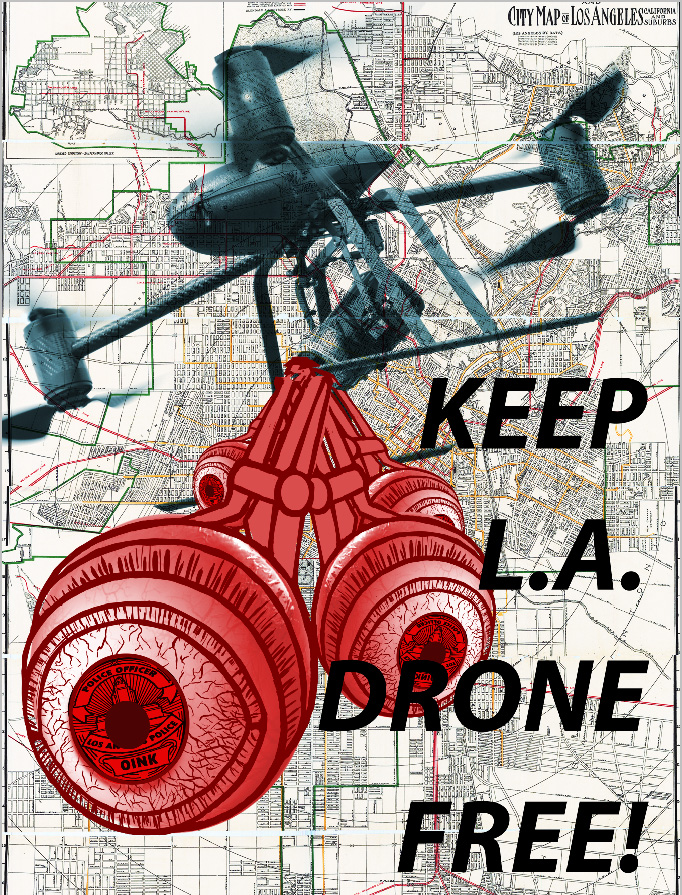 Say NO TO DRONES!

LAPD ON NOTICE: Join us Tuesday June 10th at 9:15 am at LAPD Police Commission  meeting the at 100 W. 1st, LA (across from the City Hall).  Let your voice be heard-NO DRONES in LA or anywhere!

Stand up and say NO TO DRONES

On Friday June 6th LAPD announced that it was gifted two unmanned aerial vehicles also known as “drones”  by Seattle, Washington. Seattle Police Department acquired these “drones” through federal grant money. Seattle, however, never got the drones off the ground after public cries of “ No Drones”,“Murderer”, “Shame” drowned out the City Council hearing discussing this matter. The federal grant came as Obama Administration mandated the Federal Aviation Administration to develop regulation of “drones” by 2015. Join us to drown out the police commission with demands of NO DRONES onTuesday June 10th at 9:15am 100 W. 1 St. in Downtown LA – across from City Hall!

Last week, we let you know about recently revealed reports released from Fusion Centers detailing the level of involvement of these mysterious data-collection facilities in the national crack-down on the Occupy Movement.

Members of our history and research team have taken a look at the whole set of documents and have made some startling conclusions.

Troubling reports indicate that Fusion Center officials in Maryland joked about infiltrating an occupy protest to party and “get laid.” Closer to home, in Los Angeles, LAPD shared a report via the The Guardian describing their tactics of infiltration to root out “anti-government extremists bent on violence.”  Another report from Los Angeles details that undercover detectives claimed to gather information that some protesters were preparing weapons in preparation of theLAPD raid on Occupy LA.

We’ve noted that Fusion Centers nationwide have engaged in monitoring of the evolution of the political positions of occupy participants.  Additionally, Fusion Centers were tracking movement of activists across state lines and between encampments.  Officials were also, predictably, keeping tabs on the social media presence of activists and organizers within the movement.  Curiously, they were particularly focused on the public perception of Fusion Centers themselves, meticulously taking down the names of those who posted about them.

Be sure to come out to our June 17th General Coalition Meeting.  We’ll be presenting our findings on these documents and having an in depth discussion with Occupy activists and community members about the role of the State in targeting and destroying social justice movements.  Join us Tuesday, June 17th at 6:30pm at the Downtown UCLA Labor Center at 675 S. Park View Ave., Los Angeles – adjacent to MacArthur Park.

This week, Coalition members have been hard at work outreaching to different communities.  On Saturday June 7th, the coalition participated in an empowering panel at Beyond Baroque in Venice.  The event included poetry from poets across the city and was focused on police brutality, in solidarity with victims of state murders and repression everywhere.  The event was in honor of a national day of action for Andy Lopez, a youth murdered by police in Santa Rosa, CA. Check out 100 Thousand Poets for Change and the Revolutionary Poets Brigade for more info!

LAPD Adds Drones to Arsenal: On May 30th LAPD announced it will startusing drones which resemble small helicopters … Read More