LAPD Body Cameras Could Be ‘A Cop-Out’ Say Angelenos

Los Angeles Chief of Police Charlie Beck sat, face impassive, as he listened to a second straight day of public comment on the LAPD’s new policy on officer-wearable body cameras.

Does anyone outside the LAPD have access to police body camera footage? (Only the Inspector General and the Police Commission for a Use of Force Investigation.)

If you are caught in the background of someone else’s traffic stop committing a crime, can you be prosecuted? (Yes, said the Chief of Police.)

If you’re being filmed by a police officer, do your Miranda rights protect you on tape before the officer reads your rights to you? (Unclear.)

“Body cams are a cop-out. They are a cop-out for justice, a cop-out for little-to-no community oversight over enforcement,” said Sophia Armen emphatically during the question session, voicing part of the divisive reaction to the police department’s program.

The LAPD plans to purchase 7,000 body cameras for its officers by 2016, and has already paid $1.6 million for the 800 body cameras currently in the LAPD’s possession. The cameras were field-tested by the Newton, Mission and Central divisions, the first places the cameras will be put into place when they are rolled out.

“There is no policy yet with respect to body-worn video,” said Arif Alikhan, the LAPD’s Special Assistant For Constitutional Policing, during the Q&A session.

“The process is to develop that policy through meetings like this, and through specific meetings we’ve been having with various groups.” Alikhan said the LAPD is meeting with the police union. 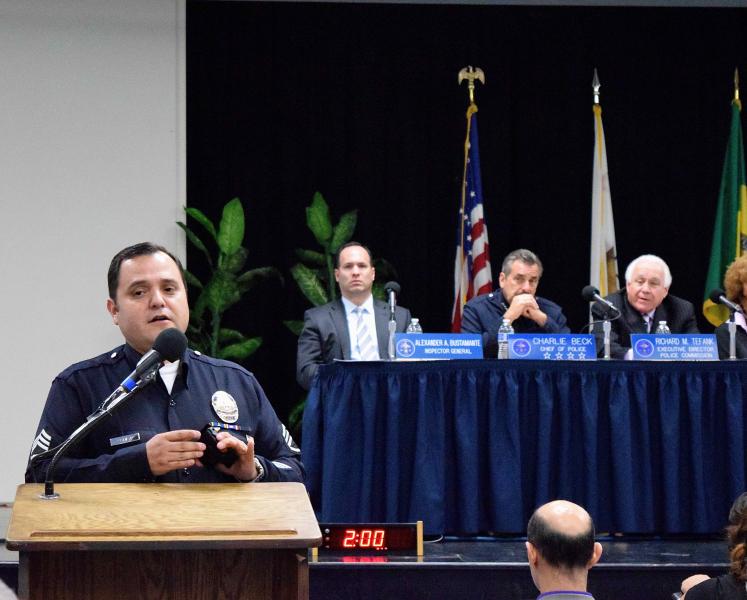 Sgt. Dan Gomez of the LAPD demonstrates the use of a body camera while Chief Charlie Beck and the Police Commission look on (Arielle Samuelson/Neon Tommy).

The Los Angeles Police Commission meetings revealed that the video footage will be uploaded to the Cloud for $85 per camera each month, and the video evidence will be kept for a minimum of two years.

Perhaps most controversially, the LAPD revealed that according to its current policy, police officers would review their own body camera footage – including watching prior to writing a report, preparing to testify at trial and being interviewed by the LAPD force investigative division. LAPD supervisors could review other officers’ videos if warranted, as could the Inspector General and the Police Commission members.

It is not likely, though, that the public would be able to view the videos due to the possible private nature of the footage. The footage would also not be available under Public Records requests, barring exceptions.

Kim McGill of the Youth Justice Coalition, a group that represents the families of those killed by police officers and juvenile offenders, explained why her group is opposed to body cameras.

“Body cameras only capture the interaction one-way, they don’t show opposite reaction or movement. So while it surveils what the community is doing, they don’t offer what police are doing.

If you are going to have cameras, live stream or upload the video immediately to an independent site and have it reviewed by an independent body. The way it is now, the evidence is only in the hands of the police.”

In the case of an arrest, Beck said that both the district attorney and the defense would be able to view the video. “Anytime somebody’s liberty is taken away, it would be available to them during the process,” he said.

“We have 10,000 police officers,” said Beck, and not all of them will use cameras. “Primarily they’ll go to the uniformed component. But we’ll also have them available to our other investigative and enforcement that are in plain clothes, when they need them on an as-needed basis,” he said.

The uniformed units include the Metropolitan division, SWAT, and the LAPD gang units, according to Beck.

Police Commission President Steve Soboroff was hopeful that the cost of the cameras ($299 per unit) and Cloud storage would be offset by a reduction in expensive litigation leveled against the department, when neither party can prove what happened.

“The costs of the first 800 cameras is $1.6 million, including everything,” said Soboroff. “We think that the potential return on that $1.6 [million] over a period of two years could be 20 or 30 million dollars. That is savings to you.”

“This is incredibly expensive technology,” she said, explaining that the money could be better spent by giving it back to the community for youth jobs, youth centers, and intervention workers. “But they say they don’t have enough money…They only have money to fix themselves.”

According to the department’s figures, 7,000 cameras would cost about $9 million; $2 million for the hardware, and another $7 million per year to host video on the Cloud. The forthcoming cameras would be paid for by tax dollars, or by proposed federal funding. LAPD Chief Information Officer Maggie Goodrich said the department plans to apply for federal money if President Obama’s announced initiative for federal funding for body cameras becomes a reality.

Sgt. Dan Gomez, who leads the LAPD’s Tactical Technology Section, said the LAPD chose body cameras made by Taser, Inc., the same company that will host the videos on the Cloud at its website “evidence.com.” Gomez said the palm-sized camera has a view of 130 degrees, shoots in standard definition at a rate of 30 frames per second. It also has an 8 GB hard drive, 16 hours of battery life and can capture footage in low-light situations.

“An officer goes into a dark room, the camera’s going to adjust and see what the officer sees,” said Gomez.

Unlike the in-car digital camera system, which Alikhan, the special assistant, said begins recording when the police lights are activated, the on-body cameras have to be activated manually by the officer. Gomez said that the cameras are built to capture police-civilian interaction 30 seconds before the camera is turned on by the officer.

But community members in attendance had concerns about officers tampering with the cameras, or neglecting to turn them on – particularly in light of previous tampering. Last spring the LAPD investigated its Southeast Division after half of the police cars came back missing the audio antennas that recorded officers’ interactions with the community.

Beck said there’s been no recurrence of antenna tampering, and that unlike police cars, “These cameras are assigned to individual officers. If somebody tampers with the camera it will be very easy to ascribe who did it,” he said. 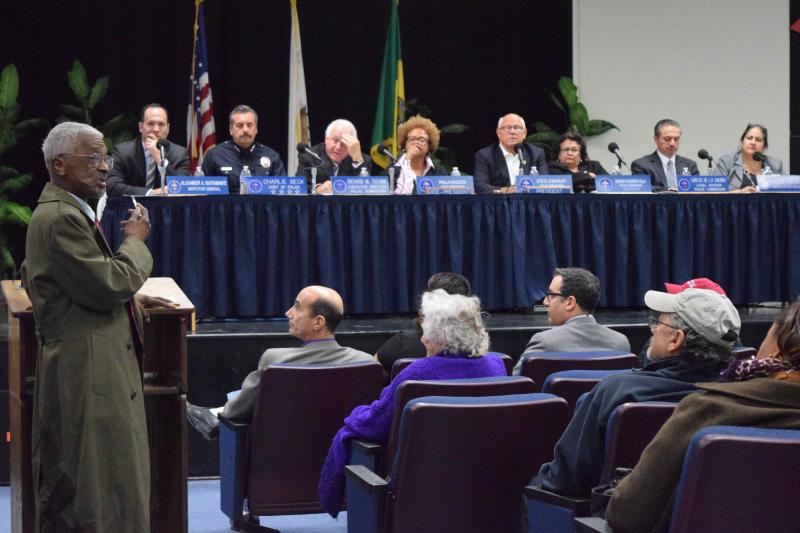 Tut Hayes describes how a camera’s lens would be blocked during a police chokehold during the Q&A session (Arielle Samuelson/Neon Tommy).

“I feel that the police are moving too much into the spy and surveillance area and too much away from protect and serve, meaning us the people. I particularly see this with people who are Latino and African-American, more so than myself as a middle-class white person. This is of great concern,” she said.

Alikhan said the police are not required to notify civilians that they are being filmed, at least in public. When it comes to homes and private businesses, where it is illegal to film someone without their permission, he said the policy is still being thought through.

“We want to encourage them to notify everybody that they’re on camera,” said Alikhan. “And obviously it will be right on the chest of the officer.”

While there were a handful of heartfelt supporters of the LAPD’s move to body cameras, questions and controversy shadowed the presentation behind the basic facets of the body-camera acquisition and technology.

Tut Hayes, an elderly black gentleman with the deep voice and theatricality of a stage actor, was one of the last to speak, and said he went to both nights of public meetings.

“Former Chief of Police Daryl Gates said, ‘Black people are abnormal. When our officers choke them, they die,’” said Hayes. He referred to a 1982 Los Angeles Times article in which Gates theorized that African-American arteries recovered less quickly after a chokehold.

“Visualize with me,” Hayes continued, using his body to demonstrate. “An officer is using an unlawful chokehold on a person – is that camera buried in the back of that person, and cannot visualize what’s going on? Is that microphone muffled by the body of that victim you can’t hear say, ‘I can’t breathe?’”

“It’s a dog and pony show,” Hayes said of the LAPD’s presentation.

Soboroff, the Commission’s president, sought to assure those gathered, some of them supportive, many of them skeptical, that police body cameras are effective. He cited aUniversity of Cambridge study whose authors conducted a 12-month experiment with police body cameras that showed a significant drop in complaints filed against officers when the cameras were used.

“To say that these cameras and their presence do not encourage and result in de-escalation of issues is just not correct,” said Soboroff.

“That’s why cameras are important,” said Beck. “Because they add yet another layer to make sure we do the right thing all the time.”