If you’re on the homepage, click the title to go to the form

By Charles Davis, Vice The police hate a bill just passed by California lawmakers, saying it unjustly limits their ability to use unmanned aerial vehicles (UAVs) to fight crime. The Los Angeles District Attorney hates it too, complaining that requiring police to obtain a warrant before deploying a drone to conduct surveillance goes “beyond what … END_OF_DOCUMENT_TOKEN_TO_BE_REPLACED

By JOSEPH SERNA, LA Times An anti-police drone coalition demonstrated outside Los Angeles City Hall on Monday and criticized legislation they said would help clear the way for law enforcement to use the unmanned aerial devices. Members of Stop LAPD Spying Coalition said Assembly Bill 1327 tacitly justifies the use of drones by police because … END_OF_DOCUMENT_TOKEN_TO_BE_REPLACED

LOS ANGELES (CBSLA.com) — Community activists opposed to the use of drone technology by law enforcement in Los Angeles and across the state of California rallied Monday at City Hall. KNX 1070’s Jon Baird reports the protest comes in response to an endorsement from Mayor Eric Garcetti of Assembly Bill 1327, also known as the … END_OF_DOCUMENT_TOKEN_TO_BE_REPLACED

The possibility of drones within the L.A.P.D. has residents worried. video platformvideo managementvideo solutionsvideo player By Kay Angrum, Annenberg TV News Video by Kay Angrum Members of the Stop L.A.P.D. Spying Coalition, Drone-Free L.A.P.D. and “No Drones, LA!” campaigns all gathered on the south steps of City Hall to express their frustration with the city’s … END_OF_DOCUMENT_TOKEN_TO_BE_REPLACED

BY MELISSA PAMER AND MARK MESTER, KTLA5 A few days after Los Angeles Mayor Eric Garcetti signaled his support of a state bill that would allow limited use of drone technology by law enforcement agencies, a community group was protesting at City Hall Monday in opposition to what it called the “militarization” of LAPD and the proposed … END_OF_DOCUMENT_TOKEN_TO_BE_REPLACED 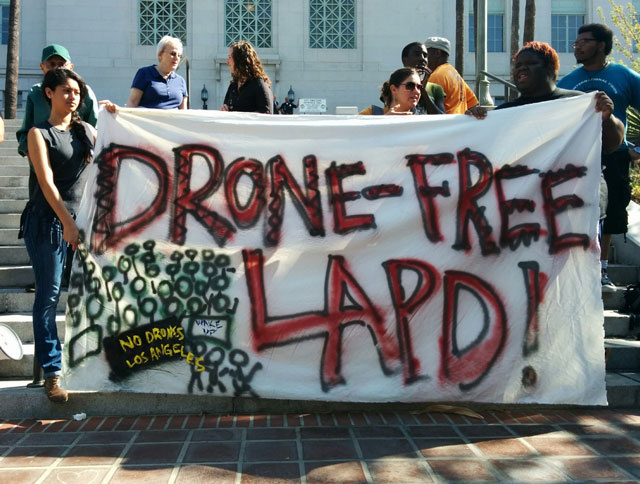 By Charles Davis, Vice Anti-drone campaigners held their press conference just outside City Hall in downtown Los Angeles Police hate the word “drone” because they know the idea of flying robots patrolling the skies is, to many people, a bit too reminiscent of a cyber-punk dystopian hellscape. So when the Seattle Police Department announced that … END_OF_DOCUMENT_TOKEN_TO_BE_REPLACED