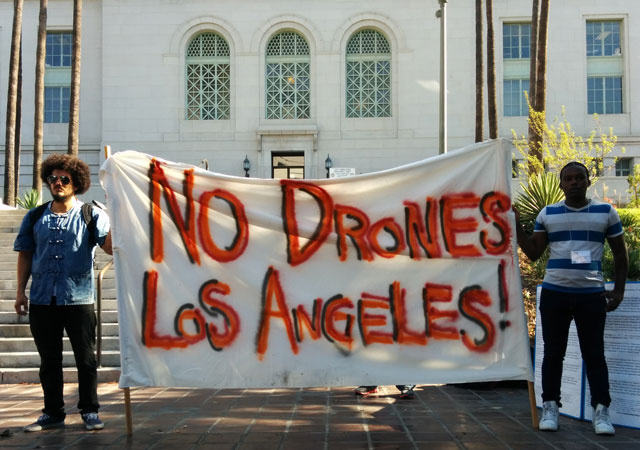 Anti-drone activists outside City Hall in downtown Los Angeles. All photos by the author

The police hate a bill just passed by California lawmakers, saying it unjustly limits their ability to use unmanned aerial vehicles (UAVs) to fight crime. The Los Angeles District Attorney hates it too, complaining that requiring police to obtain a warrant before deploying a drone to conduct surveillance goes “beyond what is required by Fourth Amendment of the United States Constitution,” which the seasoned political observer knows police and politicians are supposed to gut, not exceed.

But there’s another, somewhat unexpected source of opposition to AB 1327, passed last month by the California State Senate: anti-drone activists.

“We are gathered here today to reject the use of drones by law enforcement under any circumstances,” said Hamid Khan, an organizer with the Stop LAPD Spying Coalition, at a September 15 press conference in front of City Hall in downtown LA. Activists here are particularly anxious about drones since the Los Angeles Police Department obtained two small surveillance UAVs from police in Seattle, who had to give them away in the face of overwhelming public opposition to their use. The drones have not yet been deployed, with Mayor Eric Garcetti promising to seek public input before ever letting them fly.

While the American Civil Liberties Union of California has endorsed the legislation, which would be the state’s first attempt to restrict the use of UAVs—if Democratic Governor Jerry Brown actually signs it into law—Khan argued that “when you look at the actual bill, it has enough waivers and exceptions and loopholes you can actually drive a drone through it.”

The actual bill, on its face, looks like a step in the right direction. Right now, the use of drones by law enforcement is regulated by nothing more than the Constitution, that old, tattered rag. If signed into law, the legislation would prevent police from using UAVs to collect “criminal intelligence” without first obtaining “a warrant based on probable cause.”

But there are details—exceptions to that rule: Police could use drones without court approval in “emergency situations,” including, but not limited to, “fires, hostage crises, ‘hot pursuit’ situations… and search and rescue operations on land or water.” Drones could also be used “to achieve the core mission of the agency provided that the purpose is unrelated to the gathering of criminal intelligence.”

Some of those exceptions seem perfectly fine; no one really fears drones rescuing people stranded at sea, for instance. And to the ACLU, the legislation overall provides “much-needed judicial oversight” at a time when there is next to none. But some nonetheless fear that if you give a law enforcement agency an inch—if you legitimize the use of drones at all—we will be a mile closer to a future where drones hover outside bedroom windows to ensure marital fidelity.

Also, judicial oversight isn’t all it’s cracked up to be. In 2010, for instance, the Foreign Intelligence Surveillance Court approved every single request it received to monitor an individual’s communications. And when police come looking for a warrant from a judge—one they may have already determined is likely to give them one—it’s their word against no one’s in that courtroom, as suspects certainly aren’t given a chance to defend themselves in that setting.

At the press conference, activist Jamie Garcia argued it wasn’t so much the LAPD’s locked-away drones she feared as the broader trend they represent: “Another step in the further militarization of local police departments, giving them unprecedented amount of power and technology to collect information on our everyday lived experiences.”

Pete White of the Los Angeles Community Action Network likewise decried “the full-scale militarization of our communities by local police,” complaining that the public has been left out of the decision-making process. “For the record, I do not feel safer with military-grade weaponry and surveillance in my community,” he said. “Actually, as a black Angeleno, I feel in no uncertain terms threatened by such.”

Some in LA also feel betrayed. Though he promised not to take action on drones until the public had its say, Mayor Eric Garcetti came out and endorsed AB 1327 last week. Activists argue that, by doing so, he effectively endorsed a standard for the use of drones by the LAPD, one that the public was never consulted on. In fact, some activists don’t want a standard at all: They never want to see a drone in the LA sky, ever, for any reason. 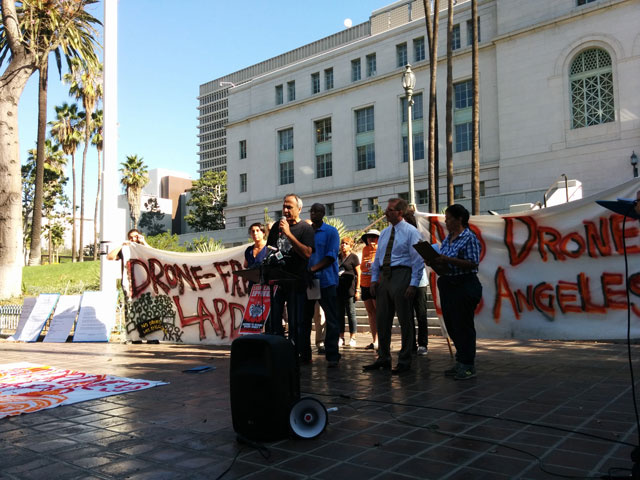 “For us as Angelenos, as a community, this bill has no value at all because we reject the drones under all circumstances,” said Hamid Khan. After the press conference, Khan told me that he and others had been promised a meeting with Mayor Garcetti himself and were told they would hear an actual date for that get-together come September 12. That’s the day Garcetti announced his support for AB 1327.

As for the meeting, Yusef Robb, a spokesperson for Garcetti, told me that Khan and other activists already had their chance to talk last month, when they met with the mayor’s public safety staff. “This group has already met with the Mayor’s office,” he wrote in an email. “The fact of the matter is no decision has yet been made and we’re going to ensure that, before one is, a public and transparent process will occur. Until then, these [drones] remain under lock and key, on the ground and not in LAPD possession.”

The drones are, however, a step closer to being in hands of local police. On September 15, the Los Angeles Police Commission—the civilian board that oversees the LAPD—announced that, three days before, the city’s two drones were taken out of the possession of their federal overseers at the request of none other than the LAPD and transferred to the commission itself. The hand-off was justified “since the LAPD has begun their community outreach and process for drafting of policies and protocols” governing the use of drones, the commission stated, adding that it expects to address the LAPD’s proposals in a series of public hearings six months from now.

In the meantime, said Inspector General Alexander Bustamante. “These two vehicles will be secured in my offices, and I will not release them to anyone, including the LAPD, until and unless the commission authorizes their release.”