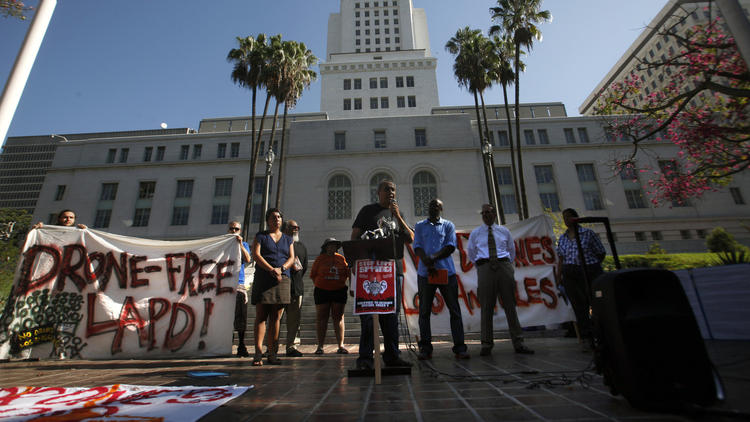 Activists seeking to limit the use of drones by law enforcement protested on the south steps of City Hall. (Bob Chamberlin / Los Angeles Times)

An anti-police drone coalition demonstrated outside Los Angeles City Hall on Monday and criticized legislation they said would help clear the way for law enforcement to use the unmanned aerial devices.

Members of Stop LAPD Spying Coalition said Assembly Bill 1327 tacitly justifies the use of drones by police because it is designed to regulate how and when officers can use the device and store data they gather. 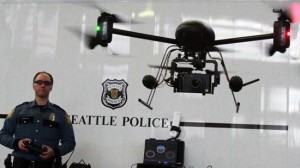 Seattle Police officer Reuben Omelanchuk at the controls of a Draganflyer, which ultimately was given to the LAPD. (Alan Berner / Associated Press)

Seattle Police officer Reuben Omelanchuk at the controls of a Draganflyer, which ultimately was given to the LAPD. (Alan Berner / Associated Press)
“We’re looking at it from the context of the historical context of these programs,” said Hamid Khan, a protest organizer. “There’s mission creep. When you look at some of the waivers and exemptions [in the bill]…they’ll become bigger and bigger.”

The bill would require law enforcement to get a search warrant in many cases and limit how long police can store data gathered from a drone. Exemptions on the warrant requirement could be made for environmental emergencies, such as oil or chemical spills.

For their part, L.A. police and city officials said they would only use drones under specific circumstances and, only then, after informing the public.

The LAPD has two Draganflyer X drones it received from police in Seattle after residents there rejected letting police used the devices.

The two drones have been locked up and under the watch of the Department of Homeland Security but,in a media statement Monday, the Police Commission announced its inspector general was taking them into his possession.

The drones will be inaccessible to Los Angeles police until it’s approved by the commission and policies drafted with public input are approved.

Critics say the move is one step closer to putting police drones in Los Angeles’ skies. The coalition says it opposes the LAPD using drones in any capacity and launched a petition in hopes of gathering 10,000 signatures.

Tags:Drone
previousLAPD On Police Commission Radar, ‘Will Not Be Used’ Before Authorization Given
nextCALIFORNIA LAWMAKERS WANT TO LIMIT POLICE DRONES, BUT ACTIVISTS WANT THEM BANNED