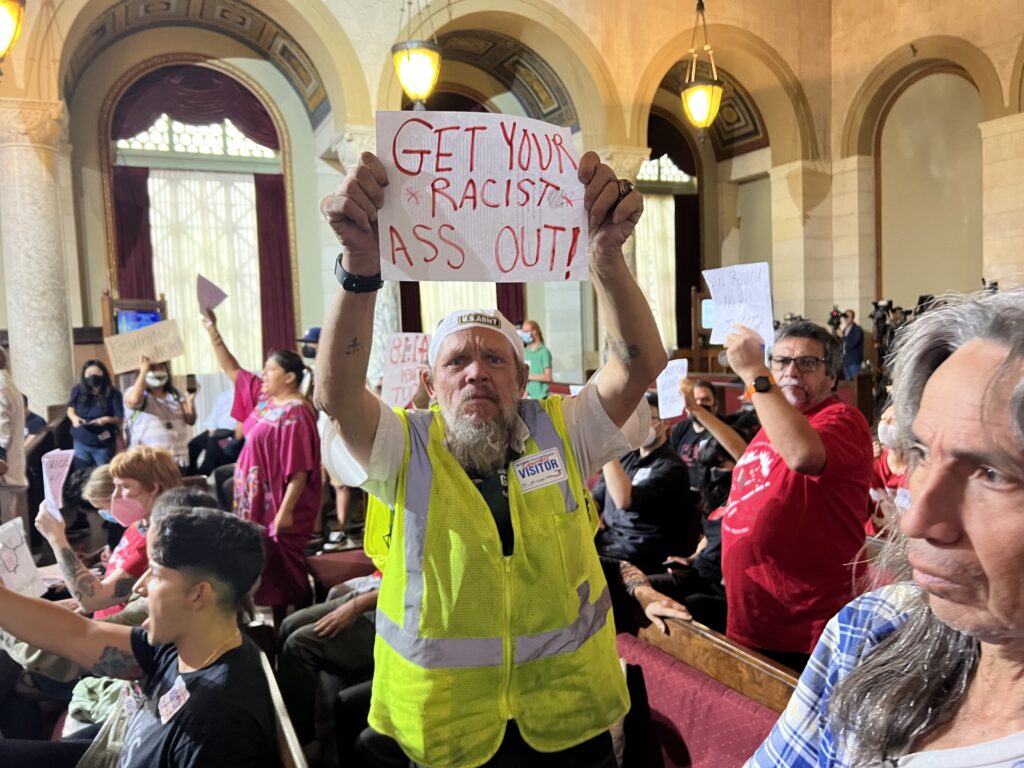 On Monday (10/10), Stop LAPD Spying Coalition and LA CAN released a joint statement addressing the leaked recording of racist remarks by Councilmembers Nury Martinez, Kevin de Leon, and Gil Cedillo. You can read our statement here. Much of the rest of the week was held raising hell in city hall, demanding the resignations of these racists.

On Tuesday (10/11) morning we were in council chambers for the first meeting since the councilmembers’ racist remarks were leaked. Gil Cedillo and Kevin de Leon had the audacity to show up to the meeting in-person, until we kicked their asses out.

That evening we had our monthly War on Youth community meeting where our comrade Mamta, who is also affiliated with the Black Alliance for Peace Solidarity Network led a teach-in on the group’s campaign against AFRICOM, the US military command in Africa. Mamta was joined by BAP-Atlanta member Tunde Osazua. Learn more about BAP’s campaign against AFRICOM at blackalliancforpeace.com/AFRICOM2022.

Wednesday (10/12) morning we were back in city council with our LA CAN family, and our partners from Union de Vecinos and Black Lives Matter Los Angeles. We prevented the meeting from starting by chanting and screaming until the convening was adjourned. We reaffirmed that there would be NO MEETINGS until we received resignations. Our actions force current council president Mitch O’Farrell to cancel Friday’s meeting.

This didn’t stop us from arriving at City Hall on Friday (10/14) morning and continuing to demand the resignations of KDL and Gil Cedillo. We took the streets surrounding city hall and echoed that we want resignation today but total abolition of these structures after that.