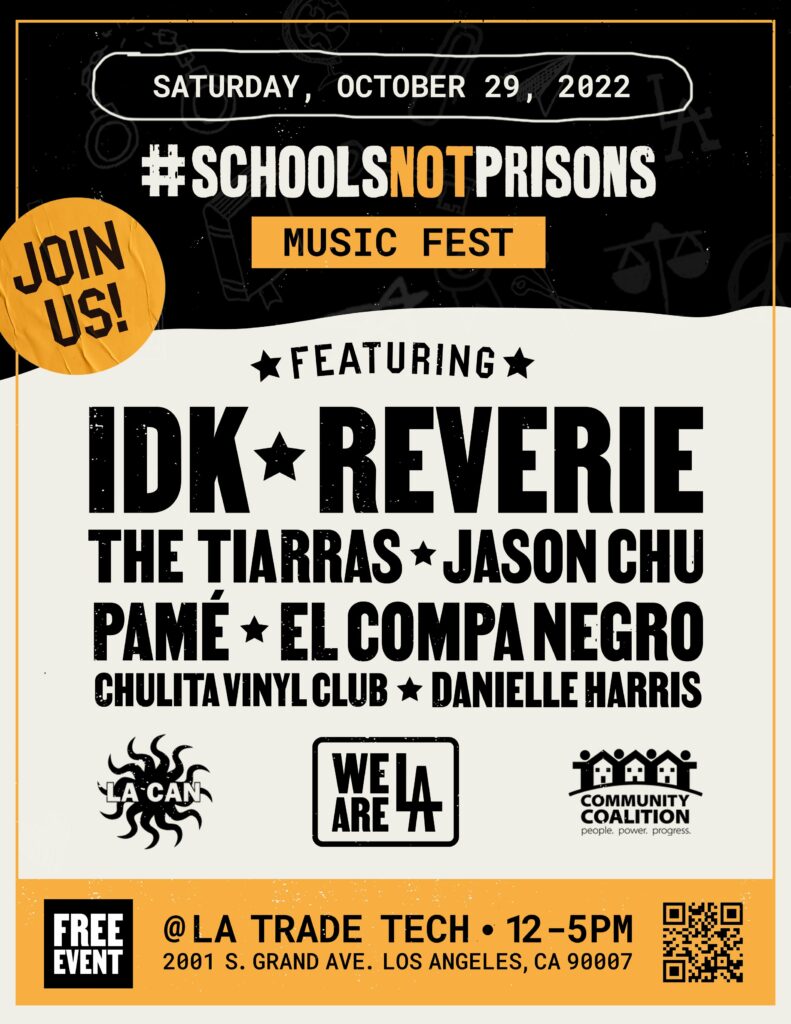 On Saturday (10/29), the Coalition supported LA CAN’s and #SchoolsNotPrisons in organizing the We Are LA music festival. The music festival was an opportunity to show the city, and the rest of the country, what Black and Brown unity in Los Angeles looks like. The festival boasted an incredible line up including artists IDK, Reverie, Jason Chu, El Compa Negro, and others.

That morning, the Coalition also participated in the 2022 Open Borders Conference. The Open Borders Conference, funded by the Free Migration Project, invites academics, activists, and community members to envision a future without deportation. The Coalition discussed the borders we see within Los Angeles, and how their expanded and enforced against communities that have historically been targeted for surveillance.

On Tuesday (11/1) morning, the Coalition was back in council chambers demanding the resignations of racist council members Kevin De León and Gil Cedillo. We continue to echo our demands that no meetings be held until we get resignations.

That evening, we held our monthly Gender and Sexuality Webinar led in partnership with the Downtown Women’s Action Coalition. This month we discussed state violence against trans and nonbinary community members.

We were so lucky to be joined by NuDiamond, an advocate for black femicide, black on black issues, trans femicide (especially trans women of color) LGBTQ rights, youth homelessness, abandoned children, women with cancer, and domestic violence victims.

We were also joined by Tsukuru Fors who is the co-founder of TRAN (Trans radical activist network), and a nonbinary rights advocate.

Special thanks to Monique of DWAC at LA CAN for helping assemble this fantastic group of speakers.

On Wednesday (11/2), the Coalition continued our fight at City Hall against the illegitimate city council, which continued to assemble despite community demands to stop meetings. The council had begun limiting who can enter the chamber, and even expanded their repressive tactics to naming and banning specific individuals from entering the council chambers.

The fight continued on Friday (11/4) and will continue until City Council has a genuine reckoning with the anti-Blackness inextricable from the policies they push forward.