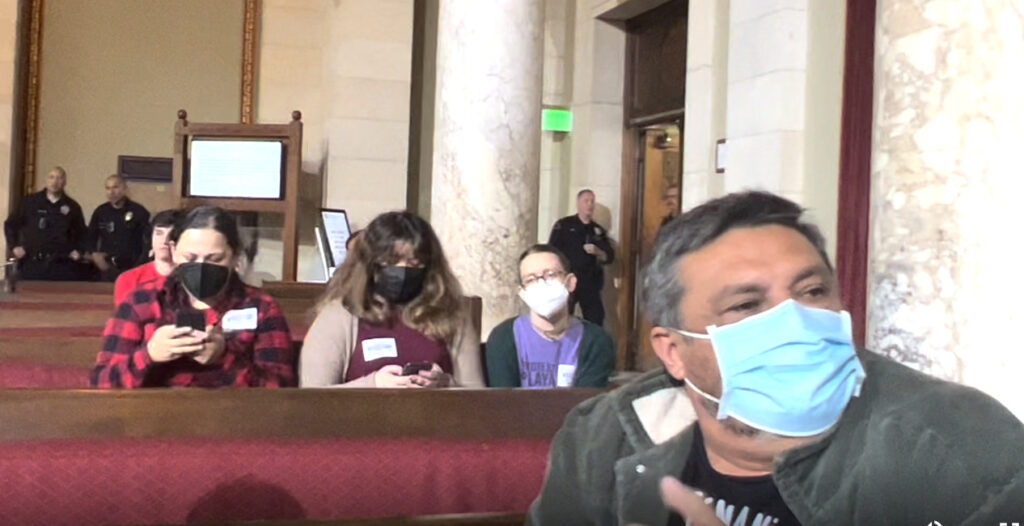 On Tuesday morning (11/8) the Coalition was back in city council chambers alongside our partners from LA CAN and Union de Vecinos to protest the racist and illegitimate city council. The council continues to target protesters and attempt to suppress our resistance by naming individuals over the microphone and sending racist officers to remove us from the chambers.

Although we were joined by new community members, city council instituted the same practices during our protest on Wednesday (11/9). We also spotted two of Kevin De León’s staffers present at the meeting and protested their presence in light of the surfaced audio spotlighting his anti-Blackness.

On Tuesday evening we had our monthly webinar for the fight against the War on Youth. Recognizing that our webinar landed on election day we exaamined our “progressive” elected officials in Los Angeles and their records when it comes to policing, surveillance, and political repression. Hamid and Akhil provided some history on the corruption that has plagued politics in Los Angeles. Maraky and Matyos discussed our ongoing actions at City Hall, demanding the resignations of councilmembers Kevin De León and Gil Cedillo and demanding City Council undo the anti-Black and anti-poor legislation enacted during their tenure. Fatima and some of our other partners from the Palestinian Youth Movement discussed the recent adoption of the IHRA definition of antisemitism that was proposed by departing council member Paul Koretz, which conflates antisemitism and anti-Zionism in order to target Palestinian organizing. Lastly, Shakeer led us in a discussion about Stop LAPD Spying’s lawsuit against Koretz, as recently covered by KNOCK LA, which revealed details of his role in youth surveillance.