No Drones-Outreach: Join us! TODAY! at 1:00pm for outreach at the Grove in Hollywood.  Meet at the corner of 3rd and Fairfax. Contact stoplapdspying@gmail.com or call 562-230-4578 for details

Communities are Standing Up to the Police State!
Save the Dates – Week of Action: December 9th, 11th and 13th

At the general Coalition meeting on November 18th following the Community Town-Hall on police militarization and drones, several new community members came out to sign up for outreach and strategize for next steps!  At the meeting, the Stop LAPD Spying Coalition moved to organize a Week of Action, starting Tuesday December 9th, with a 9 am press conference, rally, and speak-out at the LAPD’s Police Commission to demand where they have been doing outreach to the community, and demand answers as to why Chief Charlie Beck claims his staff is working with the ACLU–whose representative at last Tuesday’s meeting categorically denied any involvement crafting a policy with the LAPD.

That same week, on Thursday December 11th at 10 am the Coalition is also going to be presenting in front of the newly appointed LA City Human Relations Commission at the City Hall, in order to hold them accountable to their commitment of holding public hearings/forums about Suspicious Activity Reporting and other police policies.

On Saturday, December 13th, we’ll be joining other groups as we expose the Drone Convention being held at the Los Angeles Coliseum at USC. (Time to be announced)

Missed the November 8th Town Hall?  Check it out Online!

If you weren’t able to come or listen to our Community Town-Hall, check it out online here!

If you have trouble with that, the entire broadcast will be archived on the kpfk website for the next 90 days: http://archive.kpfk.org  Just click on that link and then scroll down to November 20th at 2PM. The show is listed as “Special Programming.” 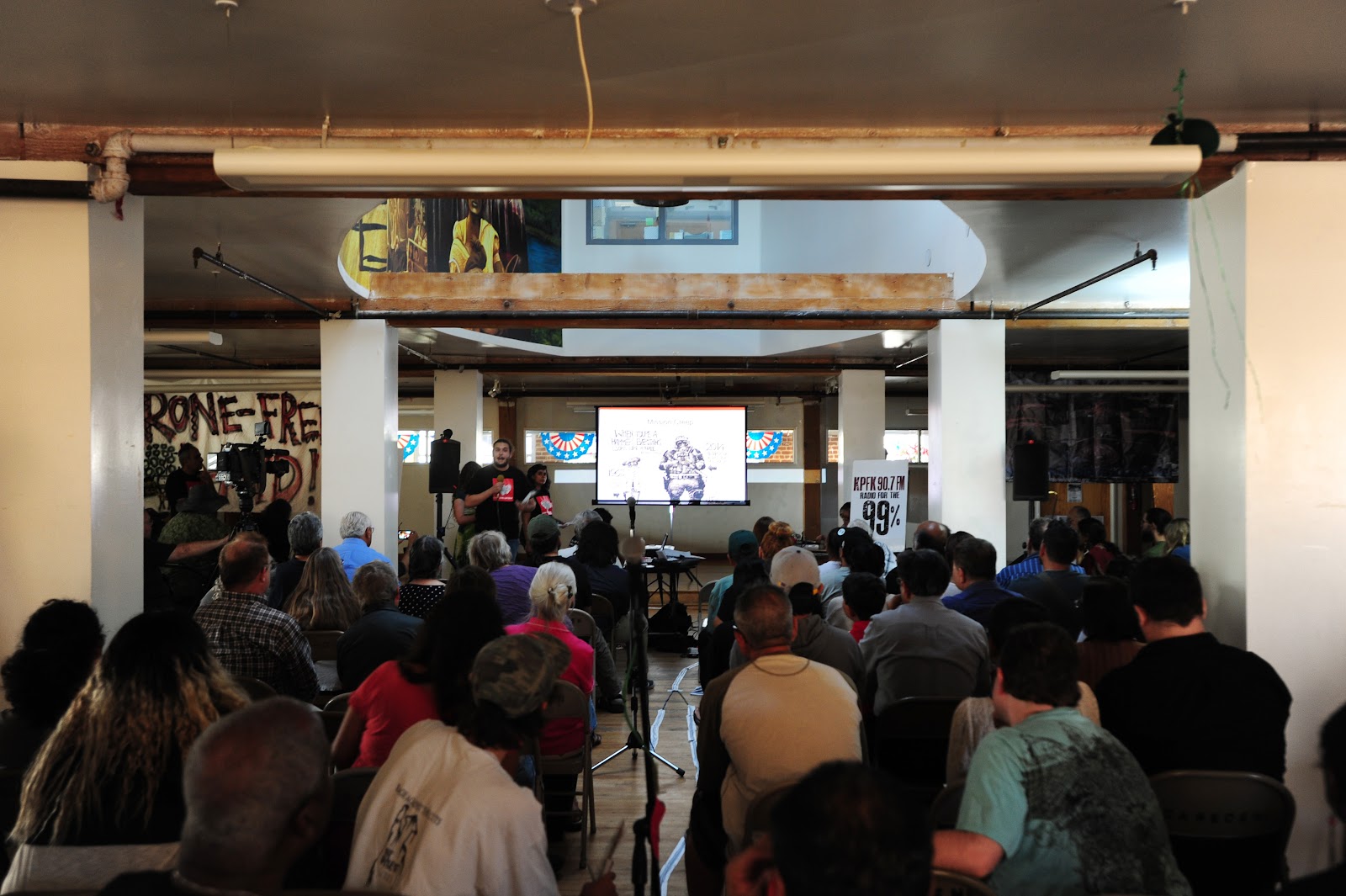 Many activists and community organizers react to LAPD’s statements related to the Ferguson indictment decision with a healthy dose of trepidation and skepticism. LAPD and other police forces around the country, including Ferguson, seem to be preparing for violence and increased efforts to stop First Amendment activity, instead of responding to the real issue raised in Ferguson – reducing and eliminating police violence and suppression in our communities.
Militarization of police in our collective understanding came to light in full force with the murder of Michael Brown by law enforcement in Ferguson, Missouri and their response to protests by community members demanding justice. Images of grenade launchers, assault rifles, stun grenades, tasers, rubber bullets, tear gas, rocket launchers along with long range acoustic devices, mine sweepers, tanks, helicopters, and several types of surveillance equipment in the hands of Ferguson police dispelled any faith, if we still had any, about “protect and serve,” and laid bare the real purpose of law enforcement in the United States operating more as a counter-insurgency force. This is, unfortunately, not an anomaly!
We Stand Against Full-Scale Militarization and the Criminalization of Dissent. Instead of Lip-Service, we demand LAPD publicly lay out their post-verdict response in detail which clearly outlines their operational plan including staffing specifically assigned to the response, identification of LAPD “hot zones,” and the list of crowd control equipment that will be deployed.

Tags:action
previousCommunity Groups Demand More Than “Lip – Service” From LAPD as the Nation Prepares for Ferguson Indictment Decision – and Stands Against Full-Scale Militarization and the Criminalization of Dissent
nextRequest for release of details re. LAPD’s Community Outreach for Drone Usage