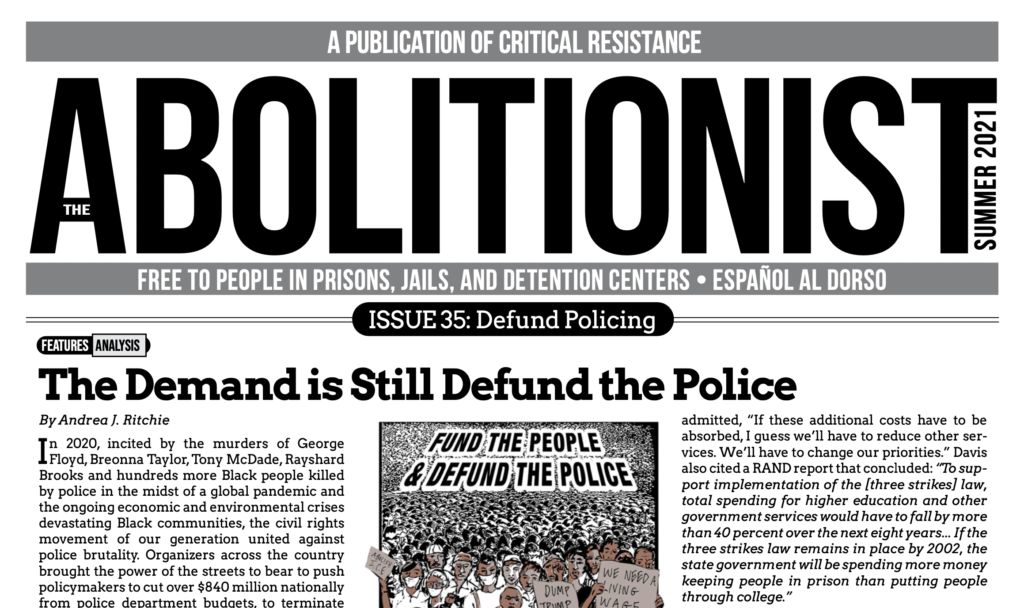 Read our new article in Issue 35 of The Abolitionist, Critical Resistance‘s “publication dedicated to the strategy and practice of prison industrial complex abolition.” You can read the article below, download the pdf here, and subscribe to The Abolitionist here.

Policing is an old, racist institution that keeps renewing itself. The Los Angeles Police Department (LAPD) has long been at the vanguard of this renewal, spending billions of dollars to pioneer new ways to control and dominate Black, migrant, poor, and Indigenous communities. Throughout this history, the machinery used to police Los Angeles has been renewed and strengthened through the process of reform. This process is facilitated largely by people who might be uneasy with policing’s optics but remain invested in its preservation.

At the same time that reformers have helped LAPD absorb shocks and strengthen themselves, our communities have resisted the white supremacist state’s violence, including by rejecting reform. Today, more and more people see that reform is how police increase their resources and powers. Seizing on this recognition, we need to mobilize fiercer resistance to reform as it happens before it expands police power.

Data-driven policing is the latest shape that LAPD’s war on our communities is taking. The term refers to the collection and mining of mass data to determine which people and places will be policed. These systems draw from a vast web of surveillance sources, data brokers, state agencies, and open-source information, putting this data at police fingertips. LAPD uses these systems to generate profiles of people, develop hotspot maps, and create secret hit lists of who to target. Many of these technologies and methods were developed for the US’s imperial wars abroad, another example of local police adopting military weapons alongside the tanks and grenade-launchers.

Today’s data-driven policing builds on past practices of speculatively criminalizing our communities and policing Black and Brown identities through the white gaze. While police use of algorithms or Artificial Intelligence (AI) technology might be novel, the underlying purposes are not. Colonizers, imperialists, and police have long gathered data on the people they subjugate in order to monitor, target, control, or eliminate them. Before modern policing it was lantern laws, sunset towns, slave catchers, and Black Codes. Before LAPD formalized data-driven policing their terror tactics included Operation Hammer (using military equipment acquired for the Olympics to raid Black and Brown neighborhoods) and the Safer Cities Initiative (an offensive of draconian “broken windows” arrests targeting unhoused Black people in Skid Row).

Like many other aspects of policing that communities are working to dismantle, data-driven policing began as reform. In 2014, the national advocacy nonprofit Vera Institute published a report with the federal Bureau of Justice Assistance that described “predictive policing” as a new “paradigm” of police analysis and highlighted LAPD’s Operation Los Angeles Strategic Extraction and Restoration (LASER) as “an example” of this trend. The report called on police departments to adopt “data-driven strategies such as hot-spot policing, problem-oriented policing, and intelligence-led policing.”

Those reformist notions of “accountability” and “efficiency” are not what the communities who worked to end predictive policing fought for. We demanded abolition. But policing exists within an ecology where institutions devoted to reform marginalize community voices and use the people’s outrage to reward police with money and surveillance powers. Once the community toppled LAPD’s racist predictive policing, police reached for new reformist concepts to regain their footing. Now LAPD’s justification for collecting mass amounts of data and harvesting it in their systems to make policing decisions is “transparency” and measuring “fairness, accuracy, and effectiveness.”

To build a world without police, and to effectively defeat data-driven policing, we need to organize against reform. In addition to dismantling the things we reject and building the things we want, abolition requires opposing the process used to renew police violence. That means resisting those who advance reform and creating crisis for their work. As we wrote in June 2020, reform is a scam:

Decades of transparency legislation, civilian oversight, and self-auditing have done nothing to reduce the power and violence of the carceral state. Instead, they helped create a vast punishment bureaucracy that lends political legitimacy and social inertia to mass caging and police violence. It is absurd to hope that applying this same framework to the governance of surveillance technology will do anything other than expand the reach and harm of policing, much like how these reforms have long made the carceral state bigger, harsher, more durable, and racist as ever.

Based in the Skid Row community of Los Angeles, one of the most heavily policed areas of the world, Stop LAPD Spying Coalition formed in 2011, at a time when reformers sought to “improve” national security surveillance by demanding better rules for it, for example criteria that would not overtly discriminate against Muslim communities. That reformist advocacy claimed to speak on behalf of an “impacted community” (Muslims targeted for surveillance) and the goal was to reduce that harm. We recognized that this reform would empower police everywhere to expand surveillance on everyone whose behaviors they deemed suspicious or dangerous, the very purpose of the Suspicious Activity Reporting (SAR) behavior surveillance program LAPD launched in partnership with federal officials. SAR was our group’s first organizing target.

This pattern of reform arming police with new weapons repeated on a broader scale after the Ferguson uprising, with reformers urging that the answer to police killings of Black people was body cameras. We knew these cameras would be used for surveillance as well as police propaganda. Now, the policing industry seeks to link body cams to artificial intelligence and facial recognition, and the footage is often used to lock up community members. Over the years our communities have watched as constant reforms do nothing to reduce policing’s death toll. Instead they keep renewing the violence. From Operation Hammer in the 1980s to Operation LASER in the 2010s, each renewal has left our communities with new suffering while also deepening our critique and our vision.

Thanks to abolitionist movement-building, more people today see the scam of reform, including many who previously championed bias trainings, body cameras, “community control” of police, and other measures that police use to sanitize their violence. While we are grateful that more people are embracing abolitionist critiques, this is also a dangerous moment. We are in a time when donors, universities, and large nonprofits are embracing the language of abolition. Are those institutions really liberating their resources, or are they just helping the system absorb shocks?The rise of the prison industrial complex cannot be separated from the advance of neoliberalism, including the growth of the nonprofit industrial complex within the same timespan. As the nonprofit industrial complex begins to adopt abolitionist rhetoric it will use this language to rebrand the scam of reform and increase faith in structures that must be destroyed.

Abolitionists are sometimes told that we only criticize, that we are too focused on dismantling and not building. Our work is building community, growing community power, and uplifting community expertise. What are reformers building besides new policies and tools that are used to hunt us? With surveillance and data-driven policing in particular, reformers benefit from pretending that police technologies are too abstract or complex for non-experts to understand. Our organizing demonstrates how wrong that is. Our people understand the harm of surveillance, which goes deeper than the privileged notion of “privacy” that legal reformers fixate on. Our people also know that proposals like oversight, transparency, and police self-auditing are dead-ends and that reforms like this are as old as incarceration. The reformers winning attention, buzz, and grant funding to push these proposals for surveillance are offering nothing novel. They act like their failed ideas are fresh because the technology is new.

Community accountability is a core abolitionist value. To be abolitionist means undoing one’s complicity in harmful social processes. Abolition requires humility and critical thinking about every choice one makes. Otherwise, we are all at risk of giving more power to the system. We all need to ask: what community base is our work accountable to? When it comes to data-driven policing and police surveillance, how many people took to the streets to demand police self-auditing? Who asked police to use data-mining for accountability and fairness?

The opposite of reform is building a culture of resistance — a richer culture of resisting policing. For us, this includes showing up every week in spaces like LAPD’s “civilian oversight” body, while at the same time asserting that these violent institutions should not exist. While many see these spaces as places to partner with the police to improve policy, we use them as sites of direct action, collective education, and political agitation. We use the space essentially to cop watch, keeping an eye on police leadership as well as to protest them, to expose the façade of “oversight,” to yell at them and confront their lies, to throw what we want in police faces. Sometimes that is literal. At a hearing in 2018, Sheila Hines-Brim walked up to the Police Chief to throw in his face the ashes of her niece Wakeisha Wilson, who had died in LAPD custody.

Our people know what they want: police off their backs, an end to police spying, infiltration, and data-gathering. Even when people don’t say abolition the vision is there. Abolitionists must prioritize being deeply present in communities. We are inspired by the long histories of resistance to policing and imprisonment, particularly resistance led by imprisoned people. Our group has been devoted to finding the organizer in people from all walks of life, trying to sustain itself without establishment support. Taking inspiration from prisoner movements and our people’s long history of resistance, we spend most of our time building community solidarity, taking care of each other, sharing knowledge, studying together, and strategizing collectively.

Policing is an intergenerational war that slavers and colonizers launched against our ancestors centuries ago. For just as long our people have fought back. No matter what we face – data-driven policing today, who knows what tomorrow – our power grows in the culture of resistance we build.