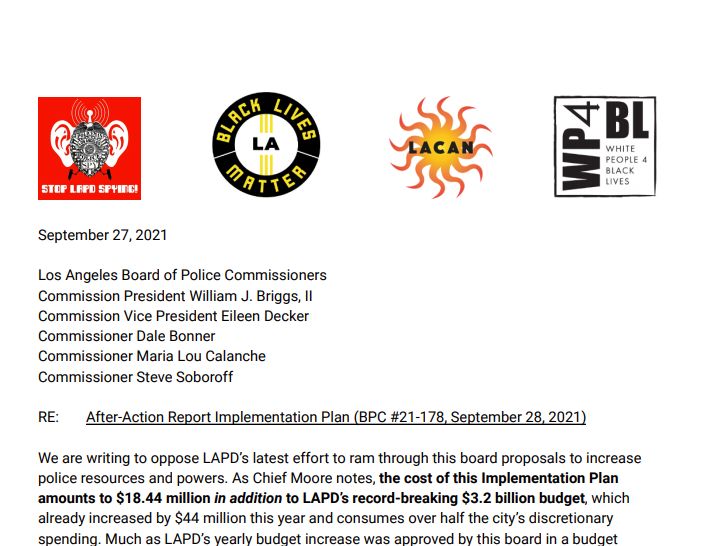 Last summer LAPD violently cracked down on the George Floyd rebellion, arresting over 4,000 people. Throughout history, politicians have responded to LAPD’s violence toward critics with expansions of police resources rather than addressing the community’s criticism. This same cycle of police crackdowns followed by police expansion followed the Ferguson uprising, the 1992 uprising, and the Watts Rebellion. It’s happening again now.

LAPD currently takes over half the city’s yearly discretionary budget for its violence, and it spent $50 million just on overtime pay suppressing the protests. Late on Friday, September 24, LAPD released a “reform” proposal that the Police Commission will vote on this Tuesday, September 28, just over one business day later. They’re trying to use their violence last summer to win $18.44 million in permanent new resources and spy powers.

This money grab is the absolute opposite of what our communities braved LAPD street violence to demand: defunding the police. Read and share our letter condeming these proposals (download the letter here):

previousPT 75: Universities, Academia, and the Police: Collaborators in the Settler State
nextPT 76: Police State and the Criminalization of Gender and Sexuality