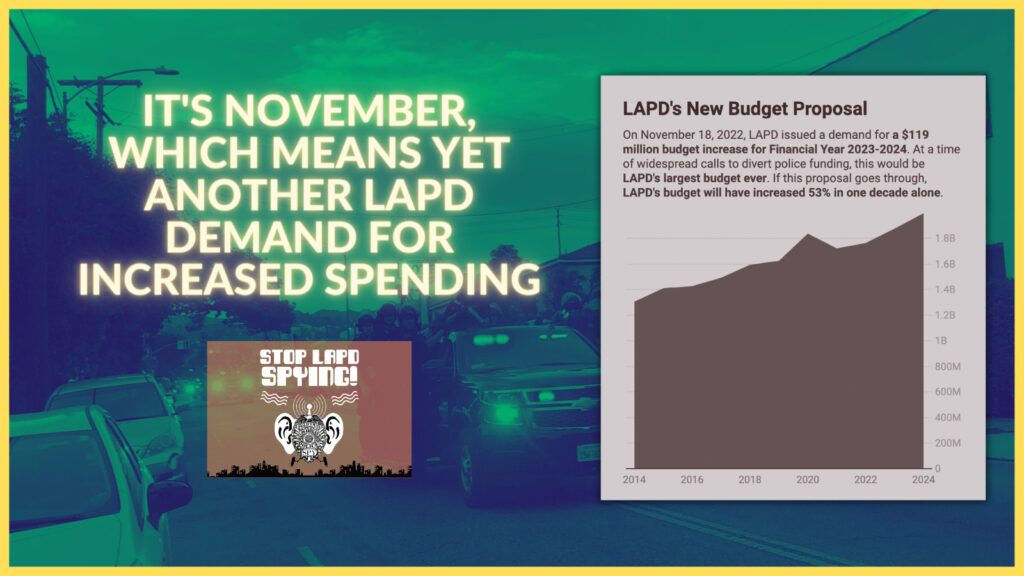 Yet Another LAPD Demand for a Budget Increase

On November 18, 2022, LAPD released its annual demand for a bigger budget, calling for a $119 million budget increase for Fiscal Year 2023-2024. At a time of widespread calls to divert police funding and curb LAPD’s astronomical spending increases, this would be LAPD’s largest budget ever. LAPD’s so-called “oversight” body the Board of Police Commissioners always votes through LAPD budget increases. In past years, the commissioners even made clear that they do not read these proposals or contemplate pushing back on them. After this vote, the budget proceeds to the Mayor’s Office and City Council.

If this proposal goes through, LAPD’s budget will have increased 53% in the past decade alone. These ongoing increases to LAPD spending will be one of the most consequential legacies of outgoing and disgraced politicians like Eric Garcetti (who became mayor in 2013 after serving as City Council president since 2006), Nury Martinez (a City Councilmember since 2013 who became president in 2020), and Paul Koretz (one of the most pro-police City Councilmembers for over a decade, defeated in his run for City Controller, a position that oversees spending by LAPD and other agencies). Even “progressive” politicians like Nithya Raman have voted to approve a massive increase to LAPD’s budget. LAPD’s new budget demand will be a crucial test of whether the city politicians elected this year will take city spending in a new direction or whether they are just new faces for business as usual.

This proposed operating budget of nearly $2 billion is not even the full funding that LAPD will consume. This is just the portion that the Mayor and City Council approve for police annually. LAPD’s full spending includes long-term funding obligations that city politicians can’t change each year, like pension spending and employment benefits, and totals well over $3 billion. And if LAPD’s proposed hiring spree this year goes through, those long-term costs will multiply further too. In addition, the budget does not account for LAPD’s millions of spending on overtime pay as well as discretionary allotments that each City Councilmember can send their way to buy favor with police.

What is in LAPD’s new spending demand? The bulk of the  newcosts is funding for salaries to hire 780 additional cops, as well as increases in pay and overtime. LAPD plans to continue to use overtime hours to address a fabricated surge in “violent crime” and also for the brutal enforcement of Los Angeles Municipal Code 41.18, a city ordinance that allows police to sweep and criminalize any visible signs of houselessness. Mayor-elect Karen Bass has applauded this law, a cruel and previously failed approach that puts unhoused community members at even higher risk of physical and emotional harm, incarceration, instability and death.

While expanding its patrols, LAPD also seeks to replace its fleet of ground and air vehicles with new models: almost 500 new cars and motorcycles (costing over $28 million) and 2 new helicopters (another $18 million, just in purchase costs). LAPD already has the largest helicopter fleet in the country. Through records requests, we’ve uncovered that LAPD has at least 29 aircrafts in its fleet. If the country’s next five largest cities (New York, Chicago, Houston, Phoenix and Philadelphia) combined their helicopter fleets, they would have around a dozen fewer helicopters than Los Angeles. But LAPD knows no one will say no to its spending demands, so it keeps asking for more.

In addition to increased surveillance on the ground and by air, LAPD wants to bulk up on staffing for its Records Management System (RMS). In 2020, LAPD ended its contract with the CIA-funded Palantir following years of community organizing and demands to end deadly “predictive policing” programs that relied on data points to criminalize people and locations. LAPD is now recreating the same functionalities with the RMS, which similarly merges vast amounts of data collected by LAPD (including through surveillance sources, cameras, third party brokers, and police arrests) and other agencies.

LAPD uses the Records Management System to create racist “missions” for police to target people and places LAPD has marked for banishment. Far from being only about “records management,” the RMS uses artificial intelligence and algorithms to make guesses and suggestions about which data points are connected and how, which are then used by police as “evidence” of suspicion or criminality. In addition, RMS software is used to set up trackers and send out alerts, based on what police have coded as “suspicious” or when a “person, object or vehicle of interest” is detected by the system. LAPD has yet to face any official scrutiny or auditing either of the RMS or the many sources this system harvests data from, including LAPD’s massive body-camera program and social media monitoring.

The communities targeted with these carceral systems and tactics are the same ones LAPD has always criminalized. These are the same communities the state has long exploited, underresourced, and underfunded: Black, brown, migrant, disabled, queer, trans, and poor people above all. LAPD is requesting at least nine more police to manage and build its data records along with new funding for collecting data on police stops, a crucial source of the data that LAPD harvests to profile, target, and criminalize people.

In building out its ranks, expanding surveillance, and dedicating overtime to banishing unhoused people, LAPD is also looking ahead to the 2028 Olympics. This budget proposal demands funding for six new positions for a dedicated Strategic Planning Team (SPT) to prepare for the games. LAPD promises this SPT will “grow in size” in future years; annual costs for this team of six is estimated at over $1.8 million to begin, with a total projected cost of over $10 million. Along with that, there surely will be massive price tags for new LAPD purchases and spending for the Olympics too. The STP will also oversee tactical training for patrols used during the Olympics, including what LAPD calls “shadow teams” (undercover units that infiltrate protests), vehicle searches, and a “potential increase in training with drone technology,” to surveil crowds and other gatherings.

LAPD is also seeking to expand “community policing,” a strategy for securing more funding and political cover for racist policing while embedding police deeper into our communities and relationships. LAPD’s flagship “community policing” program today is called Community Safety Partnership. Although a 2022 evaluation of the CSP program by researchers from UCLA and UC Berkeley found statistically insignificant reductions in observed measures of violent crime at CSP sites and noted further that “many studies have found limited evidence that community policing reduces crime,” LAPD continues to demand investment in CSP in the form of funding police salaries – asking, for example, for $2.2 million for police at Harvard Park and South Park – even though by LAPD’s own admission, the most frequent requests made to police by community residents at CSP sites are related to quality of life issues that should be addressed by city departments other than police.

LAPD knows that politicians will keep increasing their budget as the city’s many crises – including a hollowing out of housing, education, youth development, and community health – keep worsening. LAPD’s operational budget consumes over half the city budget, a reflection of the sick and cruel obsession with policing that the city’s ruling class shares. That obsession is in line with our society’s foundational commitments. It should be obvious why the city always responds to homelessness with more policing rather than housing: violently and expensively banishing people to secure land is what settlers have always done. It should be obvious why policing is the largest investment directed at the city’s Black, brown, and poor communities: violence and surveillance are always the main way that the state “manages” our communities. And it should be obvious why strategies like “community policing” are what politicians across the supposed political spectrum keep agreeing on: for decades, “police reform” has been an extremely reliable strategy for expanding the police state.

Whatever problems the city faces, LAPD, City Council, and the Mayor have time and again agreed on a single solution: more police spending. We need to break this cycle before it makes it altogether impossible to fund all of the other needs our communities face.