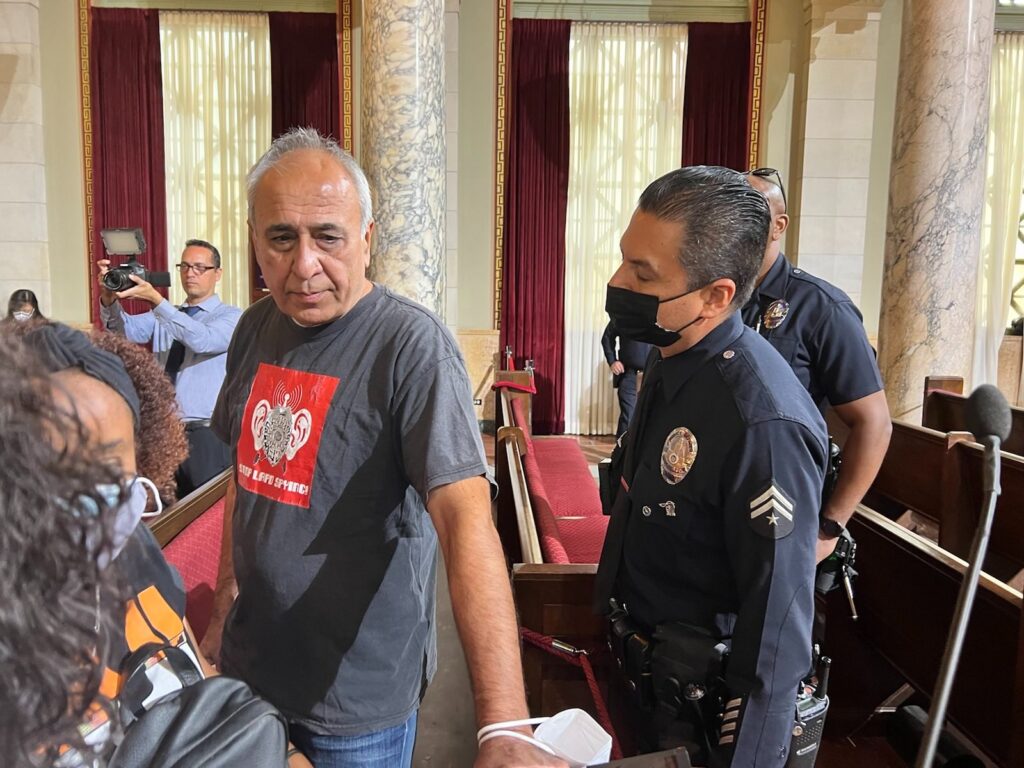 On Saturday (10/22), we honored O22 the National Day to Fight Back Against Police Brutality. This year the Coalition highlighted that ALL POLICING IS BRUTALITY. We joined our partners from Youth Justice Coalition, Union De Vecinos, the Black Alliance for Just Immigration, and of course LA CAN in a march through Skid Row to LAPD Headquarters. Click here to check out some cool pictures by Ben Camacho.

On Tuesday (10/25) morning we were back in city council demanding that there be no meeting until we get the resignations of council members Kevin De León and Gil Cedillo. Tuesday’s meeting was the first in-person meeting since Krekorian became president of the council, with his predecessor O’Farrell, silence public resistance to the meeting by introducing a virtual format. The crowds started to protest immediately after the meeting started. The council attempted to muzzle in-person attendees by wearing headphones and allowing 90 minutes of virtual public comment. We were not deterred, much of the meeting was unintelligible after virtual public comment had been heard. The council recessed for lunch undoubtedly in response to the overwhelming noise produced by the crowd.

That evening we had our Data Driven Policing Webinar facilitated by Tiff and Matyos. The discussion covered our fights against Special Order 11 which is the new technology approval and auditing system implemented by LAPD, and developments in social media surveillance.

The following morning (10/26) we were back at city hall for a press conference led by BAJI and Union De Vecinos announcing a letter signed by multiple immigrants’ rights orgs denouncing anti-Blackness and demanding the resignation of Kevin De León.

After the press conference, we were back inside City Council chambers demanding the resignations of Kevin De León and Gil Cedillo. After nearly ninety minutes of chanting and clapping, Krekorian called the meeting to a recess and the LAPD announced a dispersal order even threatening to use less than lethals if we had not cleared the chambers in twenty minutes. We held our ground for an additional 45 minutes before leaving of our own choosing!

On Friday (10/28) city council denied entry to dozens of Angelenos in a clear effort to silence community members, claiming the chambers were at capacity. This was despite the fact that photographs from council chambers showed that there were nearly four rows that were empty.

Not to be dissuaded, community members took to the streets to show the council their frustrations.

previousKNOW YOUR FIGHTS! Using Public Records Laws in Abolitionist Organizing
nextFight Back Against the Policing of Gender and Sexuality