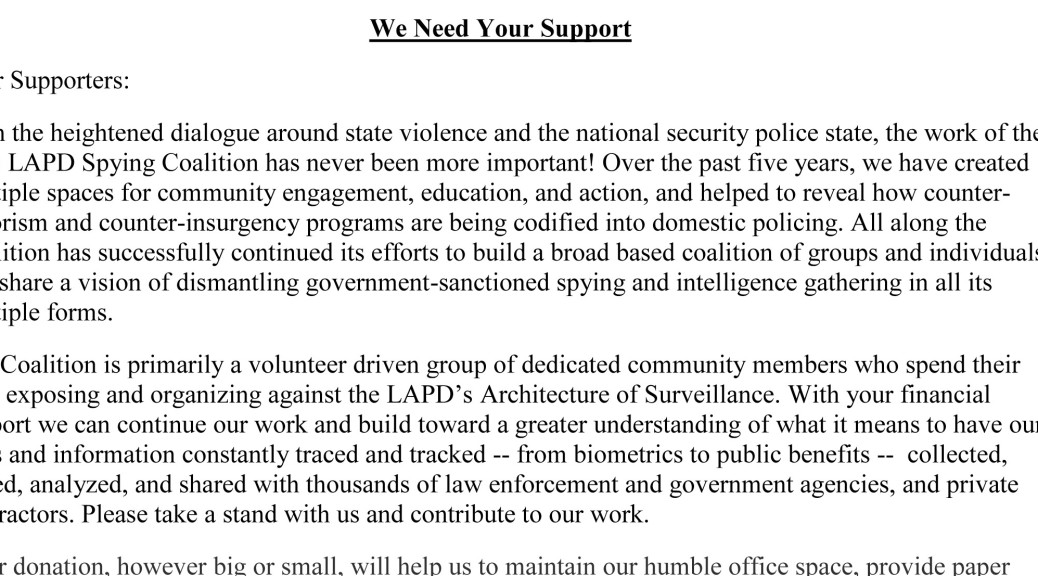 Click HERE to view a PDF of the letter below.

We Need Your Support

With the heightened dialogue around state violence and the national security police state, the work of the Stop LAPD Spying Coalition has never been more important! Over the past five years, we have created multiple spaces for community engagement, education, and action, and helped to reveal how counter-terrorism and counter-insurgency programs are being codified into domestic policing. All along the Coalition has successfully continued its efforts to build a broad based coalition of groups and individuals that share a vision of dismantling government-sanctioned spying and intelligence gathering in all its multiple forms.

Our Coalition is primarily a volunteer driven group of dedicated community members who spend their time exposing and organizing against the LAPD’s Architecture of Surveillance. With your financial support we can continue our work and build toward a greater understanding of what it means to have our lives and information constantly traced and tracked — from biometrics to public benefits —  collected, stored, analyzed, and shared with thousands of law enforcement and government agencies, and private contractors. Please take a stand with us and contribute to our work.

Your donation, however big or small, will help us to maintain our humble office space, provide paper and ink for our copying machine, allow us to print out popular education materials for countless Angelenos, of course provide folks with the delicious samosas at our monthly General Coalition meeting, and much more.

Below are the details about how to make a donation to us.  Please read carefully:

Checks: Please make your check payable to LA CAN.  LA CAN is the Coalition’s fiscal sponsor. Please write Stop LAPD Spying Coalition on the memo line in the left lower corner of the check.

In 2016 the Coalition launched three new organizing campaigns and research projects.  Starting in January the coalition launched the Our Data Bodies Project– Human Rights and Data Justice. This is a national participatory community research & organizing project concerned with how community members’ data is collected, shared, and used across systems, especially in Housing and Public Benefits systems. In June the coalition launched its campaign against LAPD’s Predictive Policing program.  Predictive Policing is modeled after US military’s counter-insurgency tactics in Iraq and Afghanistan.  This type of policing targets and stalks whole communities which LAPD has “pre-determined” to be criminal.  In May the coalition launched its campaign against the FBI Guidelines on Preventing Violent Extremism in Schools.  This campaign would prevent the LA Unified School District from adopting FBI guidelines that monitor students deemed “suspicious” in our Schools. It is through such organizing campaigns that the Coalition is building a culture of resistance and resilience toward policing programs that are built on suspicion, speculation, and criminalization of our daily activities making us all targets of state violence.

This past year we also engaged in several other events and projects exposing LAPD Surveillance, Spying, and Infiltration programs:

Thank you for your support. We look forward to seeing you next year.