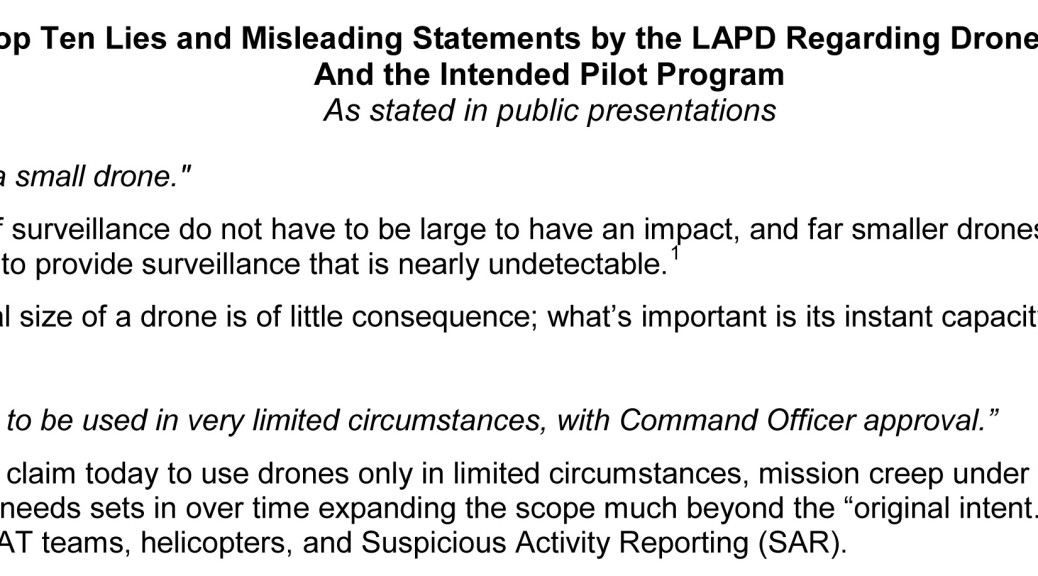 And the Intended Pilot Program
As stated in public presentations

Weapons of surveillance do not have to be large to have an impact, and far smaller drones are being engineered to provide surveillance that is nearly undetectable.[1]

The physical size of a drone is of little consequence; what’s important is its instant capacity to cause harm.

2) “It is only to be used in very limited circumstances, with Command Officer approval.”

Even with a claim today to use drones only in limited circumstances, mission creep under the guise of operational needs sets in over time expanding the scope much beyond the “original intent.” Examples include SWAT teams, helicopters, and Suspicious Activity Reporting (SAR).

When introduced in 1967, SWAT was intended for crowd control and “civil unrest,” but the mission quickly expanded.[2] Today, U.S. SWAT teams are used up to 130 times a day for such basic tasks as serving a warrant or searching for a small amount of drugs.[3]

When the LAPD got its first helicopter in 1956, it was for traffic control.[4] Now helicopters patrol daily over “crime hot spots” based on machine based “predictions”[5] (for which the St. Louis PD has already pushed to use drones),[6] and on May 8th, 2017, another precedent was set when a LAPD SWAT officer killed a person on the ground by firing from a helicopter.[7]

The SAR program was originally intended for counter terrorism, and is now LAPD’s insidious tool for everyday policing, resulting in rampant racial profiling and the opening of thousands of secret files on people engaging in innocent behavior.[8]

In each case, LAPD actions were approved by a commanding officer (CO). CO approval fails to serve as a “check” to limit how equipment is used to target, harm, and oppress.

3) “There is no intention to arm them, ever. That’s not going to happen. I can assure you that.”

History has shown that the community cannot rely on the assurances and stated intentions of the LAPD. Also see #2 above, regarding mission creep.

4) “This would actually be a terrible device for spying. You can see it pretty clearly.”

Yet in the same meeting this was said (San Pedro public meeting, August 23, 2017), LAPD described how drones would be used for the surveillance of folks who might not be aware of it: “If you fly into an area, and are able to perch it, on high ground, above where the suspect is, and you can just sit there and watch what’s going on, and if while you are negotiating you can see what he’s doing, that’s a huge advantage.”

In fact, a drone that can “perch” has an additional advantage for the operator, because its immobility saves energy and it can be used for longer.[9] The drone can be used to surveil and the LAPD knows this.

5) “It’s nothing more than getting the ability to see around corners or in places where it could be dangerous for us.”

It’s more than that. Introducing a drone to a situation where there wasn’t one previously is an escalation of tactics, and will negatively impact the person being targeted, as well as the surrounding community. In public meetings at the LA Police Commission, the Sheriff’s Civilian Oversight Commission, and in public surveys (such as on a local blog for Leimert Park residents),[10] members of communities that are already over-policed have described their anxiety, worry, and frustration at the sight and sound of police vehicles already in the sky in the form of helicopters.

For the LAPD, drones may just be “just another set of eyes.”[11] For LA residents, they represent not only a danger to safety, but an increasingly militarized police and surveillance state.

Since 2011 LAPD has killed the most people of any police department in the country – 2011, 2012, 2015 and 2016.[14][15]  When the LAPD says they need more equipment for “preservation of life,” the results are often deadly for LA’s most over-policed communities, and we cannot expect anything different with the SWAT team’s acquisition and use of a drone.

7) “Drones will not be used over a First-Amendment-protected demonstration or march.”

The key phrase here is “First-Amendment-protected,” also known as free speech rights. There are several reasons why a demonstration, protest, or public gathering would not be constitutionally protected, according to the ACLU[16] and LAPD.[17] Examples include any event with no permit where participants block traffic in the street, obstruct or delay pedestrians on the sidewalk, or fail to obey crossing signals.

Even with a permit, certain actions might prevent a gathering from being protected by free-speech laws. Those include disrupting counter protesters, engaging in speech considered to be “obscene” or “knowingly false,” or doing anything that goes against “time, place, and manner” restrictions that might be imposed by police or government officials – for example, if a crowd is gathering in front of a building at rush hour, it may be deemed an unconstitutional activity based on time and place.

In summary, we can expect that drones will be used over marches, rallies, demonstrations, parades, or stationary events.

8) “Drones are already being used by 330-something agencies nationwide.”

According to publicly accessible records (and not including drones used by federal agencies) as of April 2017, the number of law enforcement, fire, and emergency responder agencies using drones across the U.S. was 347.[18]

By referring to this number, the LAPD’s implication is that the more widely used drones are, the more acceptable they should be to the public. However, if we look at how agencies are using drones, we see an increase not only in their use, but in weaponization.

In May 2017, Connecticut attempted to become the first U.S. state to weaponize drones. Supporters of the bill described such scenarios as “attaching a Taser to a drone to incapacitate a subject, or shooting down another drone that has weapons,” and while the bill has stalled, it could get passed at a later date.[19] North Dakota has already armed drones with “less-lethal” weapons such as tear gas and rubber bullets.[20]

And while the number of law enforcement agencies in possession of drones are increasing, so is the public’s resistance to the use of these aerial vehicles by police. In Seattle, widespread concerns caused the mayor to shut down the Seattle PD’s drone program before it started,[21] and while the LAPD wants us to believe that the use of drones by police departments is a common occurrence, less than 2.13% of law enforcement agencies in California are in possession of drones, based on statistics from the California Commission on Peace Officers Standards and Training[22] and the Center for the Study of the Drone.[23]

9) “Any changes in policy would have to be approved by the LA Police Commission and the public would have a chance to provide feedback in the form of a 2-minute comment.”

It’s relatively simple for the LAPD to gain policy approval by the LA Police Commission. Appointed by Mayor Garcetti, the five-member Commission operates as a “civilian oversight” body, and it is in their best interest to approve what the LAPD puts forward, with little to no attention paid to the opinions of the public.

In an interview, Commission President Matt Johnson even acknowledged his goal to set policies the LAPD and Police Union find agreeable, because “if officers feel like they are under attack, they’ll stop policing.[24]”

The Commission is not a neutral body and cannot be trusted to hear or respond to the views of the community without a large amount of public pressure, if even then. Additionally, the meetings are held at a time and location that is inconvenient for the public (9:30AM on Tuesdays, at LAPD Headquarters), so indicating they are accessible to those wishing to weigh in on changes in policy is misleading at best.

10) “We wanted to be sure that if we were to dip our toe in this water, it would be with input and respect for the community.”

The LAPD has shown no respect for the community since the process began. On August 8th when the LAPD made their initial presentation to the Police Commission, members of the public gathered before the meeting to hold a press conference voicing their concerns, which were raised again during the meeting by different community members in public comment. None of this was acknowledged by Commissioners, who indicated they intended to go forward with a program even before hearing what would be learned through planned outreach.[25]

When the LAPD’s public meetings regarding drones were finally announced, it was one day prior to the meetings. All four meetings were scheduled on the same day and time; and none were located in neighborhoods most impacted by police occupation and violence. The Stop LAPD Spying Coalition was not notified, nor were other community groups that the LAPD knew were deeply committed to the issue.

After being challenged on their lack of community outreach, the LAPD put out a statement lying about the consensus from the meetings.[26]

Every step in the process has been marked with the lack of respect and underhandedness that the community has come to expect; yet the LAPD wants us to believe they will be transparent and forthcoming with regard to their use of drones.