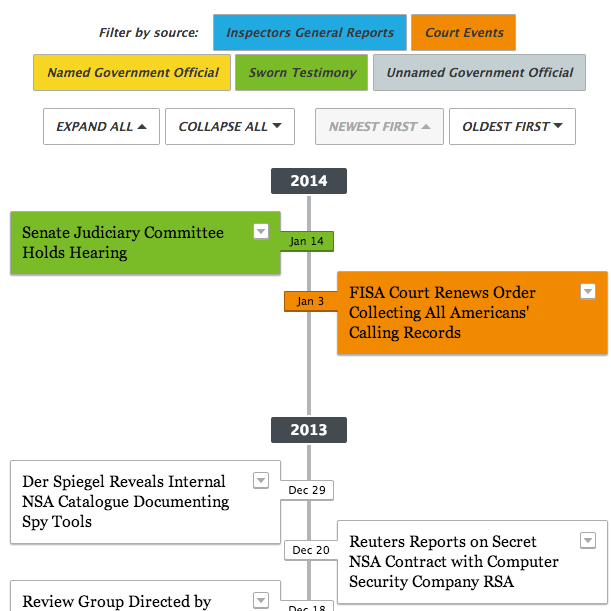 via the Electronic Frontier Foundation:

All of the evidence found in this timeline can also be found in the Summary of Evidence we submitted to the court in Jewel v. National Security Agency (NSA). It is intended to recall all the credible accounts and information of the NSA’s domestic spying program found in the media, congressional testimony, books, and court actions. The timeline also includes documents leaked by the Guardian in June 2013 that confirmed the domestic spying by the NSA. The documents range from a Top Secret Court Order by the secret court overseeing the spying, the Foreign Intelligence Surveillance Court (FISA Court), to a working draft of an NSA Inspector General report detailing the history of the program. The “NSA Inspectors General Reports” tab consists of one of three documents: a July 10, 2009 report written by Inspectors General of the Department of Justice (DOJ), NSA, Department of Defense (DOD), Central Intelligence Agency (CIA), and the Office of the Director of National Intelligence; an internal working draft NSA Inspector General report leaked by the Guardian on June 27, 2013; and, an “End to End Review” of the Section 215 program conducted by the NSA for the FISA Court. For a short description of the people involved in the spying you can look at our Profiles page, which includes many of the key characters from the NSA Domestic Spying program.