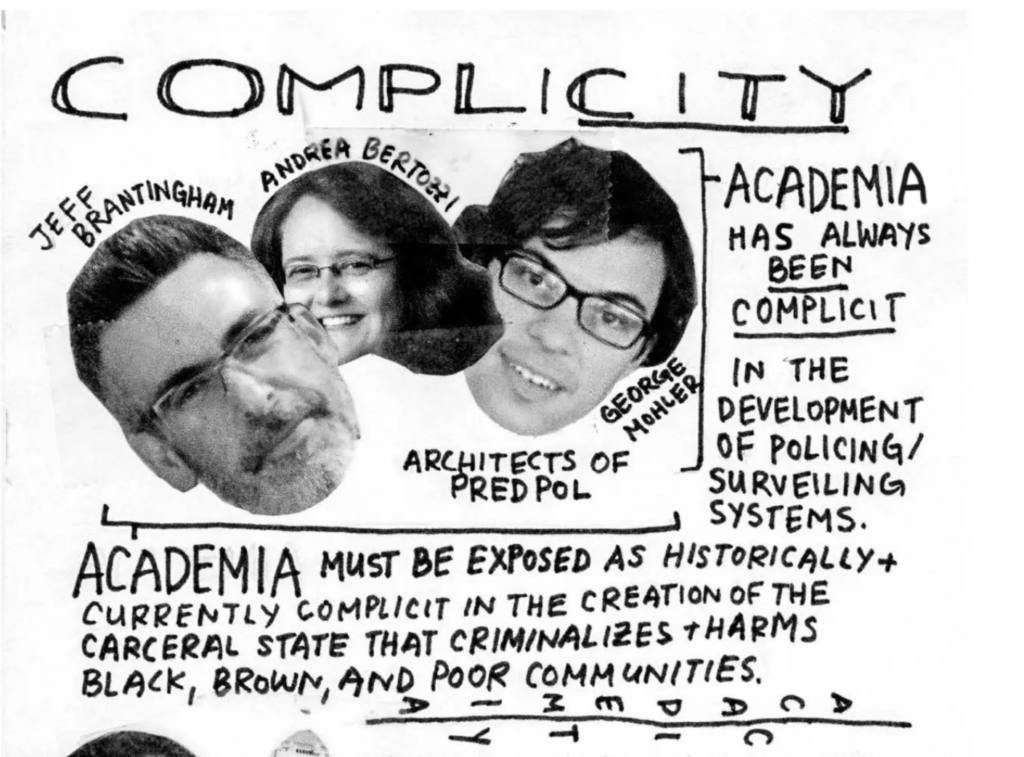 The Stop LAPD Spying Coalition filed a public records lawsuit today challenging LAPD’s refusal to turn over emails between police officials and P. Jeffrey Brantingham, a widely condemned UCLA anthropology professor who collaborated with LAPD to test and promote a discredited “predictive” policing technology.  Professor Brantingham is the founder of PredPol, which sells racist police technology across the country.  The lawsuit can be read here.

We submitted a public records request to LAPD for Brantingham’s emails nearly a year ago, in July 2020.  For years before that, we had been organizing against academic complicity in policing. Universities play a crucial role in helping advance police violence, including through “research” that promotes, expands, and provides a veneer of scientific justification for harmful police technologies.

In 2019, a group of 68 UCLA professors and graduate students sent a letter to LAPD condemning Professor Brantingham’s work on “predictive” policing technologies.  And in June 2020, over 1,400 academic mathematicians joined a public letter condemning mathematical research that contributes to racist policing.  The letter singled out Professor Brantingham’s work with LAPD and named PredPol’s “racist consequences.”

LAPD told us in February that it found over 1,690 records of communications with Professor Brantingham.  But it has refused to share a single one of these communications.  Instead, LAPD claims that letting the public see the communications would be “unduly burdensome” because it would take them too long to review the emails.  Over the past several months, we’ve made every effort to work with LAPD to ease any burdens, including by giving LAPD more time than required under the law.  After LAPD ignored and rejected proposals for delayed disclosure, we had no choice but to sue.

UCLA’s ties to PredPol and LAPD run deep.  Another public records request that we submitted to UCLA earlier this year revealed that the UCLA Foundation purchased a corporate stake in PredPol, which means that the university profits off of PredPol’s harm.  Those records are available here.

This lawsuit follows the revelation earlier this year of a confidential police memorandum suggesting an LAPD policy of singling out the Stop LAPD Spying Coalition’s records requests for obstruction and delay.  Stop LAPD Spying has long used public records to expose harmful LAPD practices, share research, and mobilize community opposition.  Today’s case is the fourth time the Coalition has sued LAPD for CPRA violations.   The first two cases helped expose LAPD’s racist surveillance tactics, and a case we filed this past February through our Defund Surveillance campaign seeks a full accounting of LAPD’s budget.

If you’re interested in joining or supporting our organizing against academic complicity, then come to our meetings, email [email protected], or contribute a donation.

Tags:featured
previousLetter on Inspector General Audit of SAR Program
nextPT 64: Police State and the Criminalization of Gender and Sexuality