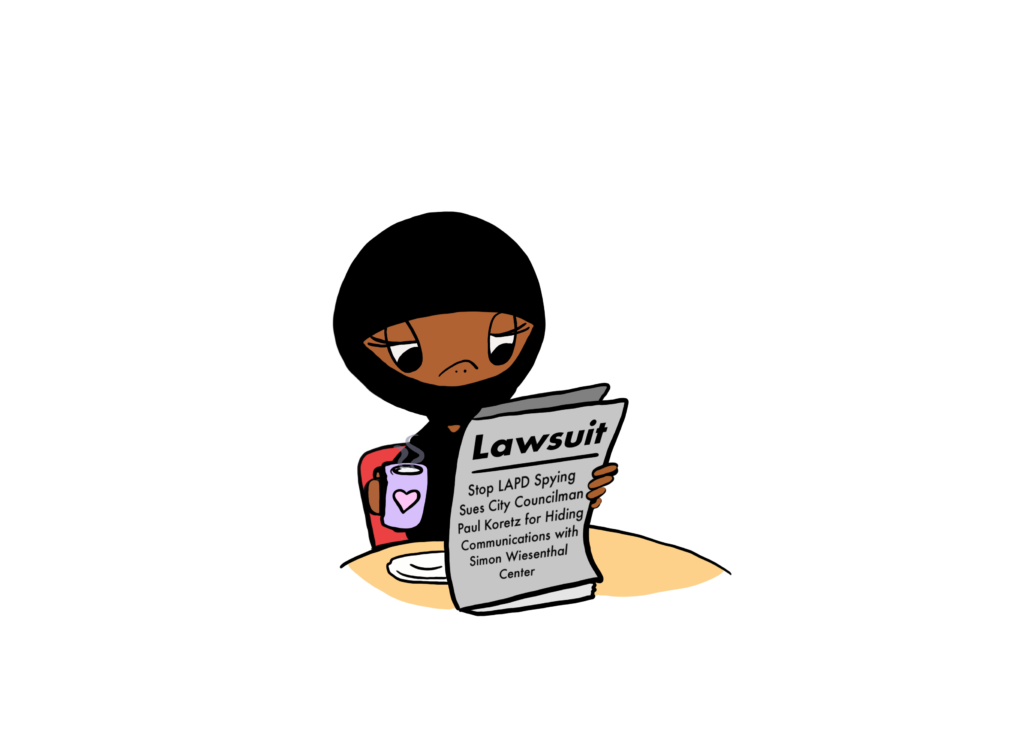 The Stop LAPD Spying Coalition filed a public records lawsuit today confronting City Councilmember Paul Koretz’s failure to respond to a public records request regarding his office’s communications with the Simon Wiesenthal Center, a nonprofit political association that works with government surveillance agencies. The lawsuit can be read here.

The Stop LAPD Spying Coalition expects these records to expose Councilman Koretz’s role in helping the Simon Wiesenthal Center secure a Department of Homeland Security (DHS) grant from the Trump administration to develop a surveillance program in Los Angeles high schools. Councilman Koretz wrote a letter recommending the Simon Wiesenthal Center for this grant the same month the Mayor’s Office rejected a similar DHS grant to LAPD to expand its youth surveillance programs.

In May 2020, the Simon Wiesenthal Center compared protestors gathering on the streets in response to the police killing of George Floyd to “domestic terrorists seeking to violently to destroy American society” and applauded the Trump administration’s move to label groups associated with the protests as terrorist organizations.  Shortly after, the Trump administration awarded the Simon Wiesenthal Center another DHS youth surveillance grant under the Targeted Violence and Terrorism Prevention Grant Program.  The Stop LAPD Spying Coalition has been fighting against this grant program for years.

“Councilmember Koretz has facilitated the Simon Wiesenthal Center’s efforts to use federal and state counterterrorism grants to create programs in our schools that place youth under suspicion of being extremists,” said Akhil Gopal, an organizer helping lead Stop LAPD Spying’s fight against the War on Youth. “The public has a right to know the details of this work.”

Stop LAPD Spying filed the public records request underlying this lawsuit in February 2021.  Councilman Koretz’s office has disclosed no records in response to the request and has ignored follow-up communications about it for 14 months. “Councilman Koretz’s office is hiding these records from the public to hide its role in police surveillance of our youth,” said Shakeer Rahman, an attorney representing the Stop LAPD Spying Coalition. “These records will help reveal the growth of surveillance and community infiltration in Los Angeles.”

Ironically, Councilman Koretz is currently running for Los Angeles City Controller, an office that oversees the city’s finances and is responsible for government transparency. His campaign website states that “Councilmember Koretz has always delivered on his commitment to governmental efficiency, transparency, accountability, and accessibility.”

The Stop LAPD Spying Coalition is a community group based in the Skid Row neighborhood of downtown Los Angeles. Join our work by either attending our meetings, emailing [email protected], or contributing a donation.

previousZINE: A CHIEF-BY-CHIEF HISTORY OF LAPD “COMMUNITY POLICING” AND COUNTER-INSURGENCY
nextPT 101: Police State and the Criminalization of Gender and Sexuality