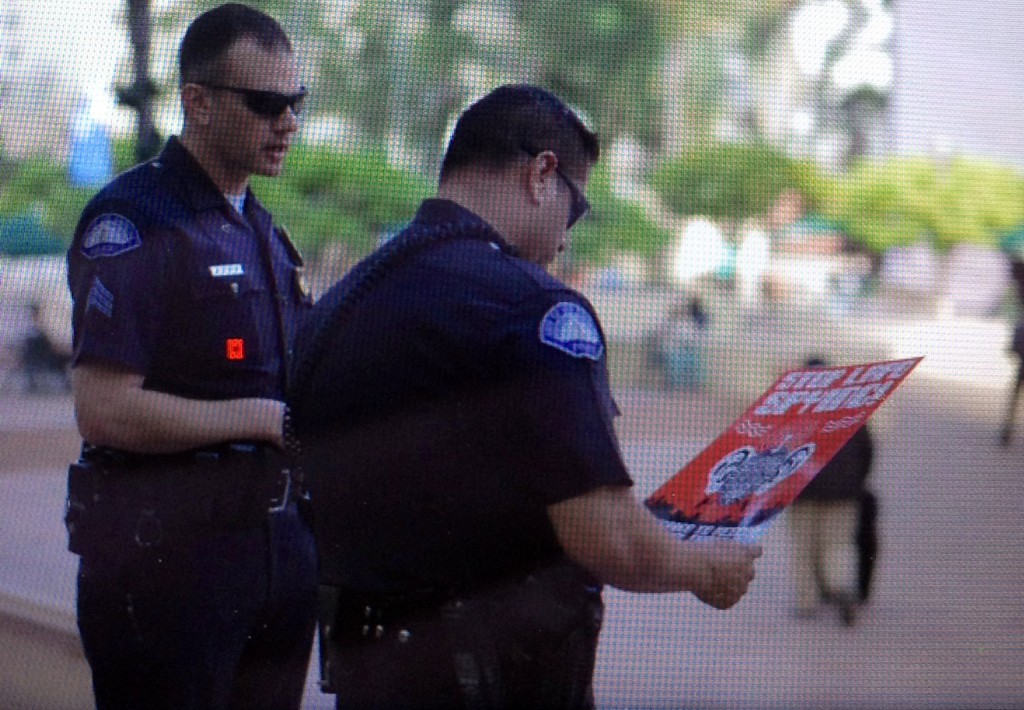 On December 17, 2013 the Stop LAPD Spying Coalition hosted the Executive Director of the LA City HRC (Human Relations Commission) Patricia Villaseñor and Senior Human Relations Analyst Francisco Ortega at the December Coalition meeting. The agenda for the meeting included a critical, in-depth discussion with HRC representatives regarding the coalition’s proposal to hold effective public hearings on LAPD Suspicious Activity Reporting (SAR) program. The proposal which was collectively developed with coalition members input outlines the goals, content, structure, and outcomes for the upcoming hearings.

The community held HRC staff to an hour long dialogue. Coalition members reminded HRC of the value and expertise amongst various communities, independent researchers and analysts, and not to favor the police as primary experts. Building on that, another community member expressed that “it is important for these proceedings to not be two sides presented as equals but that statements and opinions needed to be based on facts and evidence.” Another suggestion clearly stated that police officials, academics and other presenters, including community members should have equal speaking time. HRC staff responded that although they currently did not know what the process would look like, they would like everyone’s voice represented.

Interestingly the HRC Executive Director from the get go “clarified” for everyone at the meeting that the HRC will be holding “Forums” and not “Hearings,” even though the motion passed by HRC on October 10th clearly states “forum(s) and/or hearing(s).” The coalition’s position has been very clear from the beginning – we want the upcoming public hearings to be a platform to inform and fully engage the public and to critically assess the status quo of the programs under examination. To this end, we support the title and format of a “public hearing” instead of the more general “public forum.”

Also presented was the need to host these hearings in various neighborhoods. A coalition member recommended that a retaliation clause be put into place to protect those who testify and participate in the hearings due to the fear of retaliation for giving testimony about the police. Various people expressed their willingness to lend their expertise, host hearings in their communities and high schools, as well as send video and written testimonies for those who are unable to attend. The HRC staff shared their vision to host these proceedings in several ways including outside of the traditional City Hall set-up, especially valuing youth involvement. They suggested round tables, one-on-one’s, walking through the community and/or hosting it at different sites.

They further estimated to commencing these “forums” by late March, early April due to the change in commission appointments resulting from the election of a new mayor.  The HRC staff further stated that the “community becomes an owner of that process”.

Tentatively the first two planning meetings with HRC staff will be in February and per HRC proposal, community group of 10-15 people will be included in this planning process.

The HRC wants people to “volunteer solutions” and our Coalition has the solutions – Rescind Special Order 1 and Terminate iWATCH!