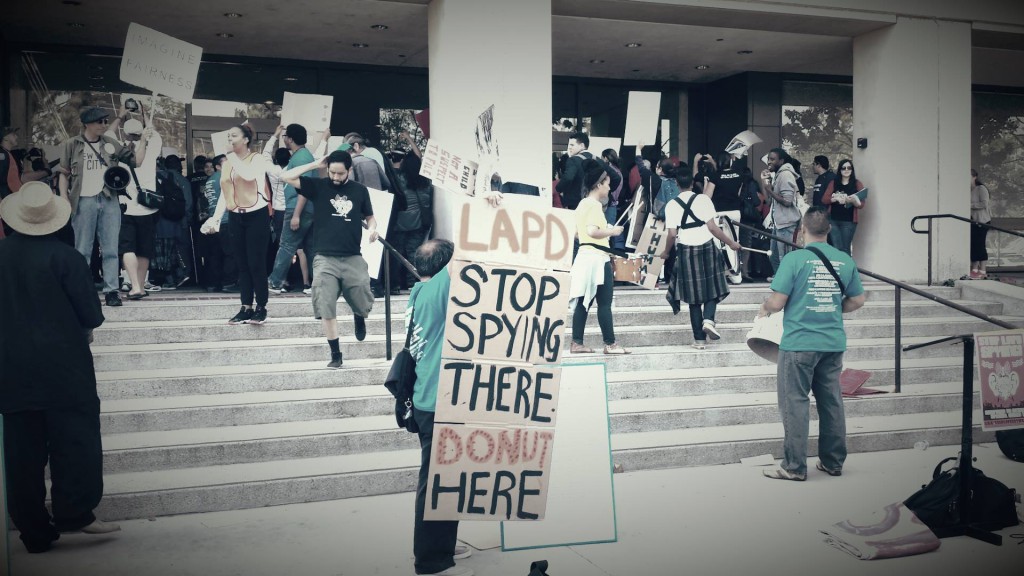 Shut down the Spy Centers!

Hundreds of people across the country—Charlotte, Dallas, Los Angeles, Oakland, San Francisco, Washington, D.C., and others–gathered in their communities on Thursday April 10th to demand that fusion centers be shut down, de-funded, and Suspicious Activity Reports (SAR) released to their communities.

In Los Angeles, over 150 Angelenos gathered outside the Joint Regional Intelligence Center also known as Fusion Center in Norwalk, CA. There was heavy presence from the Department of Homeland Security, Federal Protective Services, Los Angeles County Sheriff and local police. However, community members took to the street and confronted the Fusion Center directly.  One small delegation from the Stop LAPD Spying Coalition went to deliver a Public Records Act request to the seventh floor of 12440 Imperial Hwy–where the Fusion Center is located. While inside, in an attempt to talk with the administrator of the Fusion Center, a sheriff’s deputy forcibly pushed back a member of the delegation and slammed the door in their face.  This is what a police state looks like!

While this was going on inside, Coalition members had unfurled a fifty foot – 1800 SARs rug outside filed on community members in California obtained by ACLU.

Undeterred, community members and organizations gathered at the entrance of the Fusion Center to reach out to workers and visitors whose curiosity was aroused by the site of the crowd.

Among signs, singing, drumming and chanting, the press conference started at 11 am with powerful speakers from diverse communities in Southern California speaking out against the abuse, wastefulness, and the targeting of communities of color, especially youth. The press conference wrapped up with community theatre on the violence and intent to cause harm of these policies and the ever growing surveillance state.

Thereafter, people surrounded the entrance demanding the release of their SARs and calling for the shut-down of the facility.

With efforts to communicate with JRIC met with armed hostility, the community discussed next steps to address the expansion of fusion centers and the growth of the localized architecture of surveillance.
The Stop LAPD Spying Coalition invites you to stand with us.  Become our thought partner, strategic partner, and action partner as we build a movement to expose and dismantle the surveillance state.
Join us at our next General Coalition meeting on Tuesday, April 15th at 6:30pm at  the Downtown UCLA Labor Center – 675 Park View Ave, Los Angeles.  Across the street from MacArthur Park.  Get involved!  We’ll be discussing this week’s event, as well as our follow up.