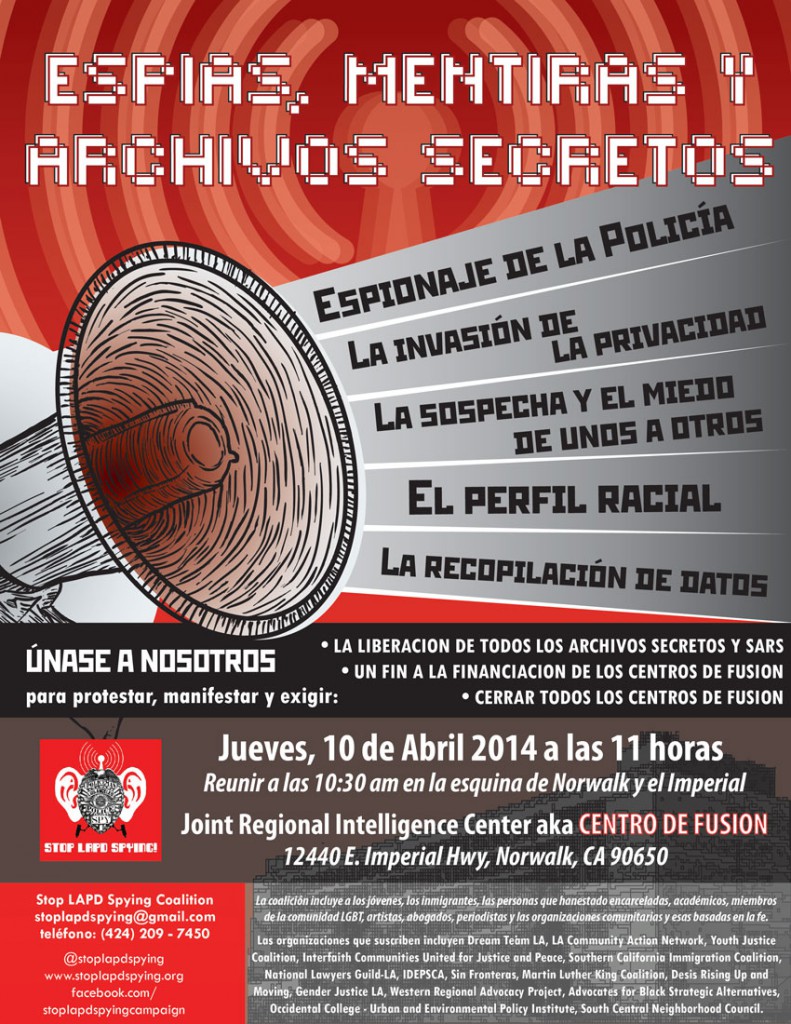 It’s been nearly a year and a half since the Stop LAPD Spying Coalition celebrated a successful disruption of the LA County’s Joint Regional Intelligence Center (JRIC) also known as the Fusion Center.  We shut it down then, now it’s time to do it again! Fusion Centers are collection facilities of vast quantities of data compiled through secret files and investigations known as Suspicious Activity Reports. These files–kept on individuals who’ve committed no crime and who’ve done no wrong–are shared with thousands of local and federal law enforcement agencies, private contractors, and even foreign governments. This April 10th, we are going to EXPOSE THE SPY CENTER AND DEMAND IT’S SHUT DOWN!

IMPORTANT INFORMATION: The Stop LAPD Spying Coalition is in conversations with several cities across the country to make this into a National Day of Action Against Fusion Centers. There are over 80 fusion centers all over the United States. Stay Tuned!

We’ll be meeting at the corner of Norwalk Boulevard and Imperial Highway at 10:30am on Thursday, April 10th.  Check out our facebook event for more info!

Get involved! Reach out to your community groups, schools, churches, and organizations and endorse Spies, Lies and Secret Files: April 10th March on the Fusion Center.  Click the link for our endorsement letter.

The NSA and Fusion Centers: All Spying is Local

The recent leaks by former government contractor Edward Snowden revealed the expansiveness of the NSA’s tracking of metadata: information related to the frequency and length of calls and conversations from phones.  However, the reach of the surveillance state is far more insidious.  All spying is local.  Through agencies such as the National Counter Terrorism Center the NSA shifts information to the Fusion Centers we are calling out and shutting down on April 10th.  Not just Suspicious Activity Reports, but several kinds of secret files are collected and shared en masse with dubious oversight to protect our privacy.  In the 1970s scandal regarding COINTELPRO and other abuses gave birth to legislation and policy aimed at reigning in the collection and sharing of information on people who’ve done no crime.  The Foreign Intelligence Surveillance Court was created as a clandestine arbiter over the government’s investigative powers.  However, this process–which served originally to oversee and protect privacy–has devolved into a tool for government expansion of powers over information and privacy.  The Fusion Center serves as a local and visible reminder of the ubiquitousness of Big Brother.  The spying isn’t in Washington, DC or Langley Virginia–it’s right here at home.

DAY OF ACTION: Join the Stop LAPD Spying Coalition as we participate in a day of action against the Surveillance State!  Thursday, April 10th, 2014 at 11:00 am at the Fusion Center at: 12440 E. Imperial Hwy, Norwalk, CA 90650.  Gather at the corner of Norwalk Boulevard and Imperial Highway at 10:30am.