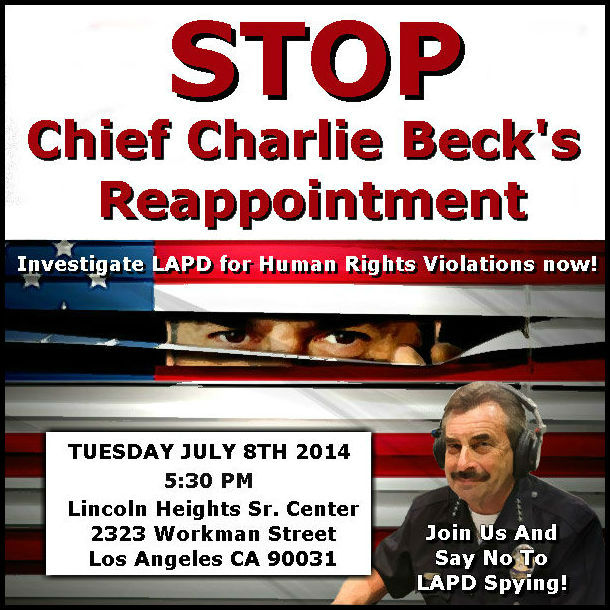 SAY NO to Chief Beck!

The LAPD Board of Police Commissioners is now considering the re-appointment of Charlie Beck as Chief of the Los Angeles Police Department. They are holding their last community meeting–in Lincoln Heights–to receive public input on what would potentially be his second 5 year term as Chief of LAPD. Commissioners will then vote yea or nay on Beck’s request at least 90 days prior to the end of his current term which ends Nov. 17, 2014.

Mainstream media claims that under Chief Beck’s leadership LAPD is highly engaged in “community policing”, reducing violent crime by 40 percent and cutting gang crime by nearly half. We the people, however, have a different report card.  One which flunks Chief Beck for the continued militarization of LAPD, countless human right violations, and Chief Becks efforts to establish LAPD as a model for local and federal partnership in regards to the National Security apparatus:

1. Beck fails at ensuring true accountability: While he admitted when his force “makes a mistake,” once, there is no actual accountability to any of high-profile police abuse incidents in Los Angeles.  Under Chief Beck, few have resulted in a criminal prosecution. For example, Dale Garrett was shot in the back and killed by plainclothes LAPD Detective Arthur Gamboa in the city’s Skid Row district. The Police Commission was compelled to overrule Beck, who they then feared was “undermining their authority and sending a dangerous message to the LAPD’s rank-and-file officers that the consequences for a unjustified shooting are minimal.”

2. Rampant Sexual Violence:  Beck’s tenure also oversaw a series of brutal rapes by LAPD officers the department tried to bury. Patterns of sexual violence by the LAPD are more widespread than just a few bad apples. The insular culture of the department remains intact – often shielding child molesters, rapists and murderers from any public accountability. On March 17, 2013 – Kim Nguyen,a 27-year-old pharmacist, says she was handcuffed in the back of a squad car when an officer began to sexually assault her. The officer’s negligence also caused her to tumble out of the vehicle. The two officers involved in the incident continue to work their regular shift while Internal Affairs investigates.

3. Oversees Repression of vulnerable communities: With the continued implementation of the “Safer Cities Initiative,” Beck’s LAPD has targeted the poor and dispossessed who reside in the Central City Association’s-Skid Row. LAPD fervor has gone so far as to create a special task force of officers targeting “Annie Moody, a homeless woman in Skid Row, for little more than sleeping, sitting or lying down on a sidewalk” entitled “Operation Bad Moody”

4. Big Brother in the Backyard: Beck champions the growing partnership of local and federal law enforcement in the ever expanding national surveillance apparatus. The iWATCH,“See Something, Say Something” program and it companion policy Special Order 1, blatantly infringe “on privacy and civil liberties, and [legitimize] spying by local law enforcement.” Targeting everyday behaviors frequently used by activists and organizers such as “using cameras in public, shooting video, using binoculars, drawing diagrams, taking notes, walking into an office and asking for hours of operation” render a person suspicious and open to an investigation and the creation of a secret file.  Additionally, the department’s Automatic Licence Plate Reader (ALPR) program photographs and stores the licence plates of thousands of LA drivers daily.

5.  Dismissive of Community Concerns:  Chief Beck, along with the City Attorney’s Office, ignored public input and railroaded over community concerns to advocate for and implement the gang injunction in Echo Park–a tool which allows cops to target youth of color and displace families.  Policies like the gang injunction, rooted in systemic racism, further the process of gentrification which displaces communities and reinforces residential segregation.

6. A Militarized Police Force: Charlie Beck continues and strengthens the militarization of the LAPD.  Delegations have been sent to Israel to study techniques for social control and aerial surveillance technology such as Hovermast: a drone device which can be used for surveillance and crowd control.  Beck Casually deployed jack-booted cops in riot-armor to disperse chalk artists in 2012, or mirroring the corruption in the US military by overseeing a department which sold SWAT weaponry for profit and then punished the whistleblower who revealed it.

This list of human rights violation is of course incomplete and missing what has not been reported, covered-up, or lacked the support to surface. Does this report card show an LAPD that LAPD “took [the Consent Decree] to heart,” as former Mayor Antonio Villaraigosa stated in his farcically tragic assessment when the Court oversight was lifted? LAPD officers blatantly violated one of the last conditions of the consent decree by sabotaging antennas on police cars which monitor officer actions through voice and video recording.

Join us as we expose Beck and speak truth to power. LAPD is not new and improved.  LAPD cannot be trusted!

L.A. Fights Back Against Cops and NSA Spying on the Innocent.  Read More…

previousWelcome to the Police Industrial Complex
nextNo Drones In LA