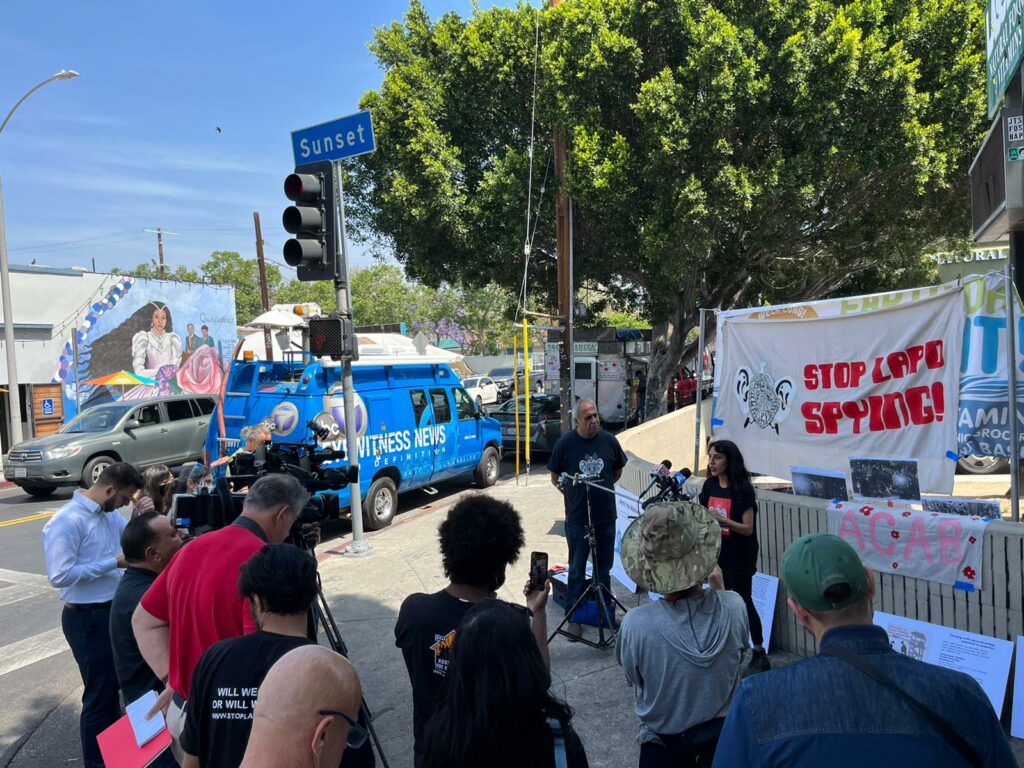 The Stop LAPD Spying Coalition has filed a new lawsuit confronting LAPD’s refusal to disclose records reflecting the location of surveillance cameras supposedly monitoring all activity in Echo Park Lake. The lawsuit can be read here.

The city says these cameras were installed after LAPD’s violent assault on Echo Park Lake in March 2021. That operation resulted in the arrest of at least 179 protestors and journalists and cost taxpayers over $2 million solely in police salary and overtime costs from the raid. One year after the operation, public records show that six of the people displaced from the park have died, and 84 are unaccounted for.

“These cameras expand LAPD’s vast architecture of surveillance, collecting data that police feed through facial recognition systems and monitor in spy garrisons they call Area Crime and Community Intelligence Centers,” said Ni Anaya, a community organizer with the Stop LAPD Spying Coalition. “This police militarization of the park is part of the settler state’s efforts to gentrify Echo Park and displace longtime residents.”

LAPD claims that disclosure of the location of even one of these cameras would compromise law enforcement.  If accepted, this unprecedented legal argument would mean that no state agency ever has to disclose the location of any surveillance camera installed anywhere on public space anywhere in the state, whether in another public park or a sidewalk facing your home.  The Stop LAPD Spying Coalition is suing LAPD to prevent that danger.

“LAPD’s insistence that it cannot do something that California law requires that they do and that they repeatedly did in the past is yet another example of the impunity that police expect in this city,” said Shakeer Rahman, an attorney representing the Stop LAPD Spying Coalition along with the California law firm Koolaq LLP.

This case is the fifth time the Stop LAPD Spying Coalition has sued the city for LAPD’s violations of public records laws. The first two cases helped reveal LAPD’s racist surveillance tactics, the third forced a full accounting of LAPD’s budget, and the fourth exposed LAPD’s work with UCLA academics to test for-profit “predictive policing” technologies on Angelenos.  Just last week the Coalition also sued the city for public records violations by City Councilman Paul Koretz.  For a decade, the Coalition has used public records research in its organizing to build community resistance against the police state.

The Stop LAPD Spying Coalition is a community group based in the Skid Row neighborhood of downtown Los Angeles. Join our work by either attending our meetings, emailing [email protected], or contributing a donation.