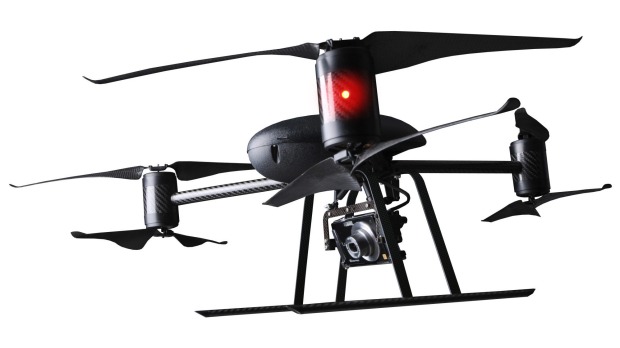 by Andrew Purcell, The Age

“Man found in an alleyway, shot in the head, no witnesses.” When Ross McNutt talks about murders that his company has solved, he likes to start like this, with a reminder of the limits of traditional law enforcement. Then, dragging his cursor across the screen, he shows me the crime scene from the sky and hits rewind.

Someone walks out of a building. Another figure is waiting for him. A car pulls up and the second man jumps in. As it drives off at high speed, several people rush out of the house and pursue the car up the street. It isn’t easy to make sense of what’s going on, because each person is represented by a single pixel, but we’ve just witnessed an execution – drug cartels at war in Ciudad Juarez, Mexico.

McNutt is the CEO and chief engineer at Persistent Surveillance Systems (PSS), a company based in Dayton, Ohio, that sells and rents out military-grade aerial surveillance equipment to law enforcement agencies. The images were captured by a camera system of his devising, mounted on a Cessna light aircraft, and made available to police on the ground in real time.

The 12 linked cameras can’t show much detail from more than 3 kilometres up – neither the weapon, nor the face of the assailant, nor the colour of the car are visible – but they do offer unprecedented  location tracking and scope. On screen, McNutt follows the car around the city, making sarcastic asides – “For some reason after you shoot somebody, the traffic laws don’t apply” – and tagging other vehicles that it comes into contact with. When it stops, and the men get out, he switches to Google street view and pulls up a picture of the blue stucco house they run into. Mexican police had the image and the address within minutes.

Much of the technology was developed at Wright-Patterson Air Force base, near Dayton, and flown over Fallujah during the Iraq war. The cameras can monitor an entire city, up to 65 kilometres, for hours at a time.

To hear McNutt tell it, the eye in the sky is a powerful deterrent, capable of reducing property crime by 30 per cent, saving a city like Dayton hundreds of millions of dollars each year. To civil liberties advocates, this unblinking surveillance is a modern version of British philosopher Jeremy Bentham’s Panopticon, a prison where the warden can see into all of the cells and prisoners never know when they are being watched.

“To be incessantly under the eyes of an Inspector is to lose in fact the power of doing ill, and almost the very wish,” wrote Bentham, which sounds like the sort of “tough on crime” message that plays well in electoral debates in the United States.

The PSS cameras have recorded armed robberies in Baltimore, directed drug busts in Philadelphia and caught a gang of necklace thieves in Compton. McNutt claims to have witnessed 34 murders and supplied information that solved a further 41. “We’ve been able to pull people over after robbing houses, in the truck, with the stolen goods, tracked from the house,” he says. But so far, nobody is buying his system. All the police forces that have run trials have passed up the chance to implement it long-term.

McNutt’s “government rate” is $US1900 ($2240) an hour. “If you just fly and hope you catch something, you spend a lot of money and exhaust a lot of resources,” says Dayton Police Chief Richard Biehl, who tested the cameras for five days in 2012. But law enforcement’s reluctance also shows what a delicate subject aerial surveillance is in an era when government already peers into every aspect of our digital lives. Biehl wanted to run a second trial, but the plan was scrapped after an acrimonious public meeting.

“One person said ‘these are drones, they kill people.’ I said ‘it’s a Cessna,'” Biehl recalls. “There’s a lot of fear of the unknown and a lack of understanding of this technology.” In Compton, residents weren’t consulted about the trial in 2012, and were outraged when it came to light this year. When Seattle City Council used federal grant money to purchase two Draganflyer X6 drones, in 2013, protesters called councillors “Nazis,” “Communists,” “idiots,” and “crooks” and got the programme shut down before it started. The drones were given to the Los Angeles Police Department (LAPD).

The law governing aerial surveillance is evolving almost as fast as the technology it regulates. Ten states have passed legislation requiring police to get a warrant before flying a drone. “There are some forward thinking legislators who realise that this could be used to create perfect enforcement of the law,” says information law specialist Professor Frank Pasquale. “We can’t really operate in that kind of world. We’re not prepared for it.”

The Fourth Amendment of the US Constitution shields citizens from “unreasonable searches,” but in Florida v Riley, the Supreme Court ruled that the “reasonable expectation of privacy” it creates at home does not prohibit aerial surveillance with the naked eye – as a California man growing marijuana in his greenhouse discovered to his cost.

Two recent decisions suggest that the court will soon decide whether drones equipped with cameras violate the Fourth Amendment. In Riley v California and U.S. v Jones, the nine justices ruled unanimously that police cannot search a suspect’s mobile phone or attach a GPS tracker to a car without a warrant.

In August, California law-makers passed a Drone Privacy Protection Act requiring a warrant for everything but search-and-rescue, wildfire inspection and emergencies. The bill was vetoed by Governor Jerry Brown, and is not popular with the police department. “In situations where time is of the essence, where people are being held hostage or you have an armed assailant, getting warrants can delay the response,” LAPD spokesperson Lieutenant Andy Neiman says.

The Draganflyer drones weigh less than two kilograms and can stay in the air for 25 minutes, carrying a high-resolution video camera. Neiman prefers the term Unmanned Aerial Vehicle. “Every time we use the word drone, people connect that with military-type weaponry and the ability to shoot people,” he says. “These vehicles are much smaller. They’re not armed. They’re basically an expensive toy.”

The drones are being held by California’s Inspector General, pending “community outreach and policy development” but Neiman makes it clear that the police are keen to use them. “The use of UAVs to support law-enforcement operations at critical times is invaluable, and I think the community will see that,” he says.

Hamid Khan, of the Stop LAPD Spying Coalition, sees it differently. “When you look at the whole apparatus of the LAPD: tanks, helicopters, SWAT, stun grenades, minesweepers … you get the picture. And you add the whole architecture of surveillance, from SARs to automatic licence plate readers. Once you add drones to the mix … this is what occupying forces act like.”

He argues that once the LAPD’s drones are airborne, mission creep is inevitable, citing the example of Special Weapons And Tactics (SWAT) units. These were created to deal with hostage situations and mass shootings, but a recent American Civil Liberties Union study found that they now mostly make drug arrests and serve search warrants.

The Suspicious Activity Reports (SAR) programme, conceived as an anti-terrorism measure, has resulted in thousands of people being flagged as possible suspects without committing a crime, their electronic profiles shared across law enforcement agencies for acts as mundane as taking a photograph of a bridge or demonstrating “unusual” interest in a building.

In February, eight senior LAPD commanders went on a work trip to Israel, to visit surveillance companies including Sky Sapience, manufacturers of the Hovermast 100 tethered drone, developed for the Israeli Defence Forces. “There are several things on the wish list, but we did like Sky Sapience – that was incredible,” Deputy Chief Jose Perez told the Jewish Journal.“Crowd control and being able to see everything would be some technology that is needed immediately.”

Neiman admits that “there’s a possibility of mission creep with anything that we’re authorised to do,” but points out that the Police Commission, Inspector General and independent watchdog groups are set up to prevent it. “Any time something new is introduced there are conspiracy theorists who will claim that there’s intent to invade people’s privacy,” he says.

Also in February, Australian Federal Police revealed that they are using drones in major investigations, but only at crime scenes where they have a warrant, telling a parliamentary inquiry that a UAV was employed to search for the body of murdered anti-drugs campaigner Donald Mackay in rural New South Wales.

A spokesperson for Queensland police confirmed that the force owns two drones and uses them “in operational situations, with very strict guidelines and limited use” but never for covert surveillance, and New South Wales police last week  confirmed that they intend to use drones and are “currently progressing a project to determine the suitability of integrating Remotely Piloted Aircraft Systems (RPAS) into their operations”.  Victoria Police, however, said they did not own or used drones.

So this is the law enforcement line where drones are concerned: they are a powerful tool, to be used sparingly, where a police helicopter or plane is impractical. But even if these promises about mission creep are kept and warrant requirements are imposed, there will be plenty of other drones in the sky.

In the United States, Congress has set a deadline of September 2015 for the Federal Aviation Authority to come up with regulations governing drone flights. Researchers, journalists, environmentalists, city planners, farmers and filmmakers are keen to use them, as are firms doing business at the margins of existing privacy laws. The FAA is expected to grant clearance for up to 30,000 unmanned aerial vehicles, mostly to private companies subject to far fewer restrictions than government agencies when it comes to collecting and sharing data.

To allay privacy concerns, PSS has a strict data use and accountability policy, but there is no guarantee that drone operators will be so scrupulous. As the price of drones drops, and the cameras they carry become more powerful, it creates space for a surveillance industry along the lines of commercial data brokers, who sell digital profiles to law enforcement agencies.

“There is so much money to be made from companies owning this surveillance data and the government buying it from them,” says Pasquale. “So you have this corrupt bargain.” In the future, if a police force is prevented from tracking a criminal or a political activist from the air, it could simply buy the recording and match it to images from cameras on the ground or location data from phones.

In a Washington Post poll last November, only 14 per cent of respondents said there should be fewer cameras in public places, whereas 69 per cent said they were concerned about the government and private companies collecting information from their electronic devices. The thought of Big Brother watching you from the sky is alarming, but in the post-Edward Snowden era we know that the images are just one data stream among many.

“My worry is that people will just sort of shrug and get used to it,” says Pasquale. “I bridle at that, because it suggests some sort of consent, and I don’t think we can say ‘society chose this’.” It has taken only a decade or so for us to become accustomed to CCTV’s ubiquity and to understand, if not accept, that our phones are being tracked. Will we accept aerial surveillance as readily?

Tags:Drone
previousWeek of Action
nextJoin us this Week to Expose and Dismantle Drones and the Surveillance State! – December 9th, 11th and 13th