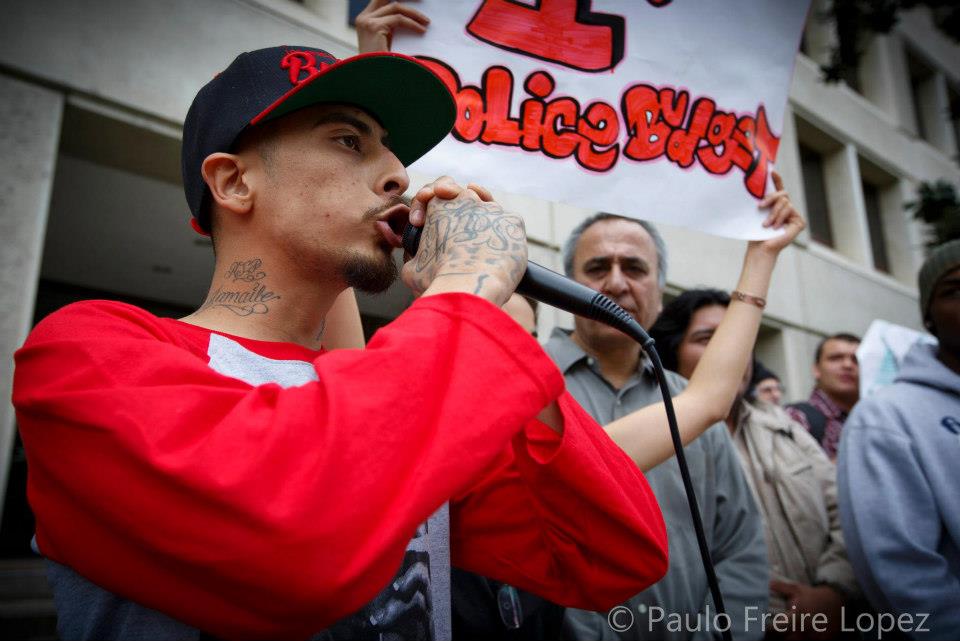 The Stop LAPD Spying Coalition has a simple goal: to end dragnet police spying that treats everyone as a potential suspect. The coalition formed in response to the LA police department’s instating of “Special Order 1,” which authorized and instructed officers to file so-called “Suspicious Activity Reports” on people even where there is no demonstrated nexus to criminal activity, and to share this information with various agencies in the federal government. (This program operates in most major cities nationwide.) The order “infringes on privacy and civil liberties, and essentially legitimizes spying by local law enforcement and promotes racial profiling,” the coalition says.

The latest target of the coalition’s advocacy work has been the local fusion spy center, where activists held a march and demonstration last week to air their grievances with the police.

The coalition issued a release describing the event:

Over a hundred community members surrounded the Los Angeles Regional Fusion Spy Center on Thursday, December 13th in Norwalk demanding an end to invasion of privacy, assault on civil liberties, and waste of public resources.  Several people were surrounded by LA sheriffs and private security, and threatened with arrest as people marched inside chanting “What are you Hiding!”  At one point the whole building literally locked down.
The Call to Action organized by the Stop LAPD Spying Coalition exposed the local area Fusion Center, which is part of a larger network around the country of approximately 77 such spy centers.
The coalition continues to build a diverse grassroots campaign to build public awareness, participation, mobilization and action to rescind policies such as LAPD Special Order 1 & the iWATCH program. A number of damning reports about fusion centers have come out of the senate in recent months, including a recent report by Senator Tom Coburn which details how DHS allocated billions of dollars that purchased surveillance toys and other unnecessary items for local law enforcement. Another report, published by a senate subcommittee for investigations, called fusion centers a waste of public resources and quoted a DHS official who said that the centers don’t produce much valuable intelligence at all — and that it’s “mostly crap.” Take a look at the video below to hear testimony from protesters in Los Angeles, including from Hamid Khan, the lead organizer at the Stop LAPD Spying Coalition, who spoke about how these national policies are affecting the city. Not one conviction has resulted from information gleaned via LA fusion center spying, says Khan. He and the coalition’s other activists believe that we need a mass movement for privacy and to stop unchecked government spying.
“We need to expose these Fusion Spy Centers and demand an end to the assault on our civil liberties, invasion of our privacy and an end to waste of public resources. We need to look beyond the framework of legal/constitutional challenges, and build public awareness, participation, mobilization and action,” Khan told me.
previousDownload Flyers and Help Spread the Word! CALL TO ACTION! RALLY TO EXPOSE the NORWALK FUSION Spy CENTER!
nextCommunity Storms Fusion Spy Center