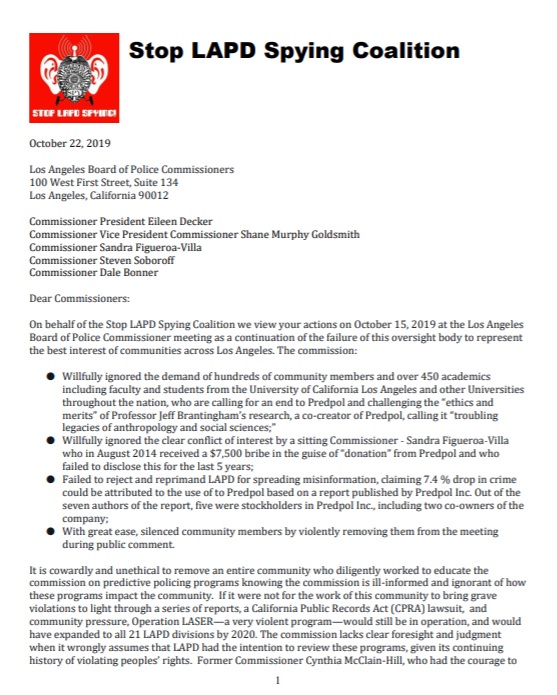 On behalf of the Stop LAPD Spying Coalition we view your actions on October 15, 2019 at the Los Angeles Board of Police Commissioner meeting as a continuation of the failure of this oversight body to represent the best interest of communities across Los Angeles. The commission:

It is cowardly and unethical to remove an entire community who diligently worked to educate the commission on predictive policing programs knowing the commission is ill-informed and ignorant of how these programs impact the community.  If it were not for the work of this community to bring grave violations to light through a series of reports, a California Public Records Act (CPRA) lawsuit,  and community pressure, Operation LASER—a very violent program—would still be in operation, and would have expanded to all 21 LAPD divisions by 2020. The commission lacks clear foresight and judgment when it wrongly assumes that LAPD had the intention to review these programs, given its continuing history of violating peoples’ rights.  Former Commissioner Cynthia McClain-Hill, who had the courage to demand a hearing and audit, should be seen as an example of how an action of a member of a “civilian oversight board,” expected from the community as per the city charter, CAN uplift and support community presence and concerns.

This commission acts only in the interest of Los Angeles Mayor Eric Garcetti and Los Angeles Police Department and are complicit in the continued oppression, mass displacement, and violence inflicted on Black, Brown, and poor communities. You operate on the wrong side of history.  It has always been clear to us that this commission is a failure.

The intent of this letter is to expose the commission’s corruption, demand the immediate annulment of the October 15th decision approving LAPD’s report back, and re-schedule and agendize a public hearing on the item with immediate effect on the forthcoming LA Board of Police Commission meeting.

Furthermore, we also want to create a historic record that you are a violent force seeking to intentionally silence a community.  We expect to hear back from you at the earliest.