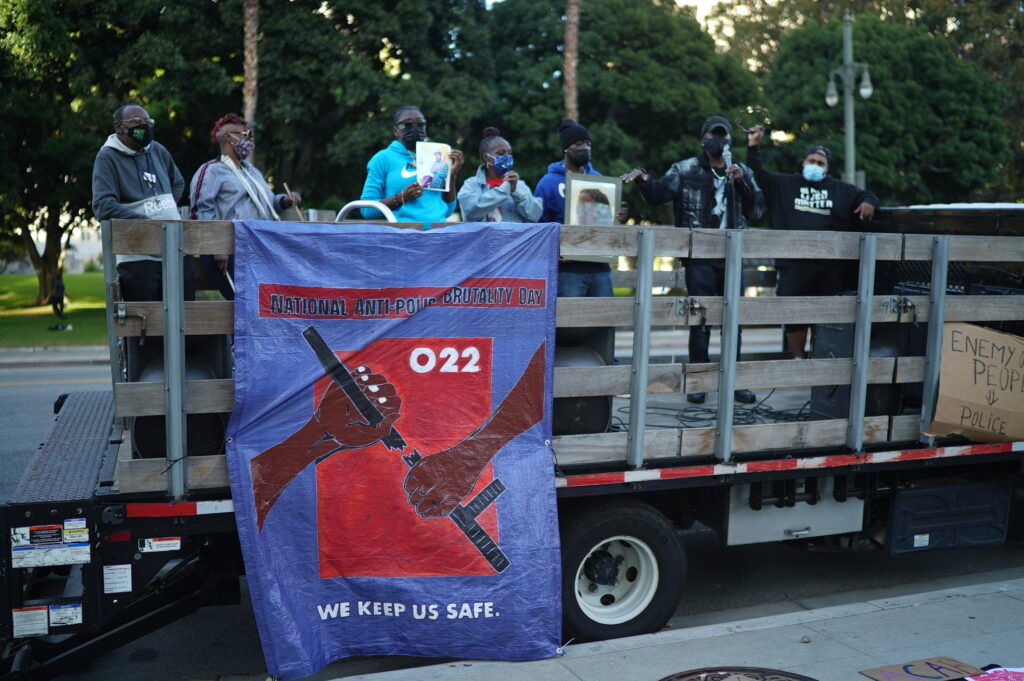 Dear friends, this week the Coalition organized, amplified, and executed a powerful O22 action in front of LAPD headquarters. We also supported BLM’s End Police Association action and presented our Architecture of Surveillance and Algorithmic Ecology at the Oxy Arts Encoding Futures exhibition. Click the link to read more about the work we’ve been doing!

On Monday (10/18) The Data Informed Community Focused Policing (DICFP) working group met to continue the fight against this most recent iteration of predictive policing. The group discussed developments with the Coalition’s upcoming report on land and policing, including the strategies being developed around social media and comms rollout ahead of the November 8th release date. Join the DICFP webinar this upcoming Tuesday (10/26), to help plan the release of the upcoming report and learn about some new findings about the LAPD’s SARA project.

The DICFP WG also discussed ways we can support BLM-LA’s efforts to combat ShotSpotter in Pasadena. As many of you know, the City of Pasadena recently approved and entered a 3-year contract with ShotSpotter. ShotSpotter markets itself as a surveillance system that uses sensors, software, and AI to locate gunshots in communities. However, research shows that the software has been ineffective and only serves to further criminalize Black and Brown communities. We will be meeting with BLM-LA to help continue this fight.

On Tuesday (10/19) the coalition logged on to the Los Angeles Police Commission meeting to call out the fact that LAPD officers had fired their guns at Angelenos 5 times in the last two weeks. We also raised the fact that 30 people have been shot at by the LAPD this year, and 11 of those people were killed. In coalition with our partners at LAPC Fails, we also uplifted the blatant disregard the LAPD has had regarding Covid safety. The commission continues to serve its purpose by providing the illusion of oversight while failing to provide any real accountability to this frenzied police force. The Coalition will continue to monitor these meetings and provide developments on the LAPD’s efforts to expand their police state.

At 12pm we had a successful twitter storm to amplify our O22 action. The toolkit was developed by the Coalition in partnership with Jason from BLM-LA. Our prepared tweets covered the many forms in which police brutality takes shape and highlighted how this evil is present across all our fights here in Los Angeles. We want to thank everyone that was able to participate, this played an invaluable part in our successful O22 action (more on that later).

On Wednesday (10/20) the Coalition supported BLM-LA’s weekly End Police Association action across from the Los Angeles Police Protective League (LAPPL) building. Coalition members participated in an energizing drum circle led by Project Knucklehead and distributed our zine, Blueprint for Displacement, to rally attendees. BLM organizers announced the coalition’s O22 action and encouraged folks to attend. The End Police Associations action takes place every Wednesday at 4pm in front of the LAPPL building, we encourage folks to go and support this rally.

On Thursday (10/21) the Coalition presented our Architecture of Surveillance and Algorithmic Ecology at Occidental College’s Oxy Arts space. After presenting a brief timeline of surveillance, we introduced an interactive component to the presentation that had participants look inside their wallets and list the various entities that could be surveilling them and how they’re being surveilled. The workshop was a part of Oxy Arts’ Encoding Futures exhibition, which raises awareness of the issues Algorithmic technology presents in our lives. The event was a great opportunity to show people that the surveillance we experience today is part of a long history of surveillance used to brutalize communities. The exercise also encouraged folks to be more conscious of the many arms of the surveillance state and how they encroach into our lives. Many of the participants signed up to learn more about the coalition and showed interest in some of our working groups. We look forward to growing our collective power.

The coalition ended the week by shutting down the streets of Downtown Los Angeles for our powerful O22 action. For 26 years now October 22nd has been a day to take the streets in opposition to police brutality. While attention for O22 had dwindled in recent years, the Coalition in partnership with our local allies sought to revitalize the day with direct action. The Coalition’s own Ni kicked off the event with a land acknowledgment and an honoring of the four directions. We also heard from the family of Grechario Mack (murdered by the LAPD) and the chosen family of Vanessa Marquez (murdered by South Pasadena PD) on how police violence has stolen their loved ones from their lives.

LACAN’s Staci and Maritza led chants and MC’d with our comrade Jason from BLM-LA, and we were joined with speakers from local organizations leading this fight. General Dogon offered a scathing indictment of the City Council and their campaign of violence through legislation on the unhoused. C.C. from LATU and UTACH offered a touching and empowering testimony on how their experience as an unhoused community member led to direct violence at the hands of police. After leading a march around the block highlighting the buildings that serve as temples to our subjugation, we closed the event back at LAPD headquarters.

We want to thank everyone who helped organize this event. We want to extend a special thank you to Felipe from SEIU for providing and driving the truck that served as our stage; Adam, Audrey, and everyone else from WP4BL for directing traffic, and Michael Williams from BLM-LA for helping with security. Lastly, we want to say thank you to everyone that attended and participated in this show of collective power. We look forward to doing this again next year.

That’s it for this week. We look forward to sharing our collective fight with you again, next week.