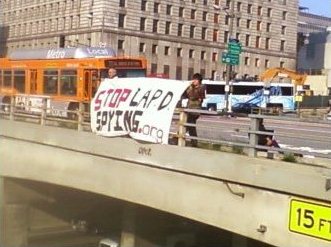 The community action on Tuesday April 10th started bright and early with a 10 ft banner held by community members on an overpass on the 101 freeway reading “Stop LAPD Spying.org”. People honked in agreement and at one point over a dozen LAPD officers on motorcycles caravanned by and reminded the banner holders that they were being watched. One police officer pointed to his eyes and then at the group proving that point very directly.

From there, we moved to the front of the LAPD Headquarters on 1st and Main where a larger group of 70 or so community members had assembled. Many were holding signs including the 24 foot long timeline of surveillance, while others were drumming, chanting and dancing.

The press conference began at 9 am. There was a medium size press contingent including LA Times, ABC, Ch 22, CBS, KCAL 9, KPFK, KNX, Azteca America and others. The press conference started with outlining the history of the issues, followed by 6 speakers including Deborah Burton, a downtown resident and member of LACAN, Julia Wallace, board member – South Central Neighborhood Council, Jim Lafferty – Executive Director of the National Lawyers Guild, Shakeel Syed from Islamic Shura Council, Nancy Meza, member Dream Team Los Angeles and Emilio Lacques, a youth organizer with Youth Justice Coalition. They all shared their concerns and strong opposition to LAPD’s policies of spying and surveillance. One after the other the speakers demanded that LAPD rescind Special Orders 1 and 11 immediately.

From the front of the headquarters after the press conference, we entered the Police Commissioner’s meeting and demanded that they move the public comment earlier from the scheduled time which is typically late in the meeting. The commission concurred followed by approximately twenty five (25) speakers who told their stories, shared their pain, and demanded LAPD rescind Special Orders 1 and 11, and terminate the iWatch program. It was clear by the testimonies and comments shared with the Commissioners, Police Chief and others at the meeting, that people feel violated- instead of feeling safe and trusting, the actions and words of the LAPD make communities afraid and distrusting of them. They could not ignore us- our group represented many different communities and showed to them that this issue affects everyone.

• TERMINATE THE i WATCH PROGRAM IMMEDIATELY!!

The day of action concluded with follow up plans to meet on Tuesday April 17th and discuss next steps.

Many thanks to everyone for their effort and solidarity in sending a clear message to LAPD and the Police Commission. This will be one of many actions to pressure and shame the LAPD and the city to rescind Special Orders 1 and 11 and terminate the iWatch program.