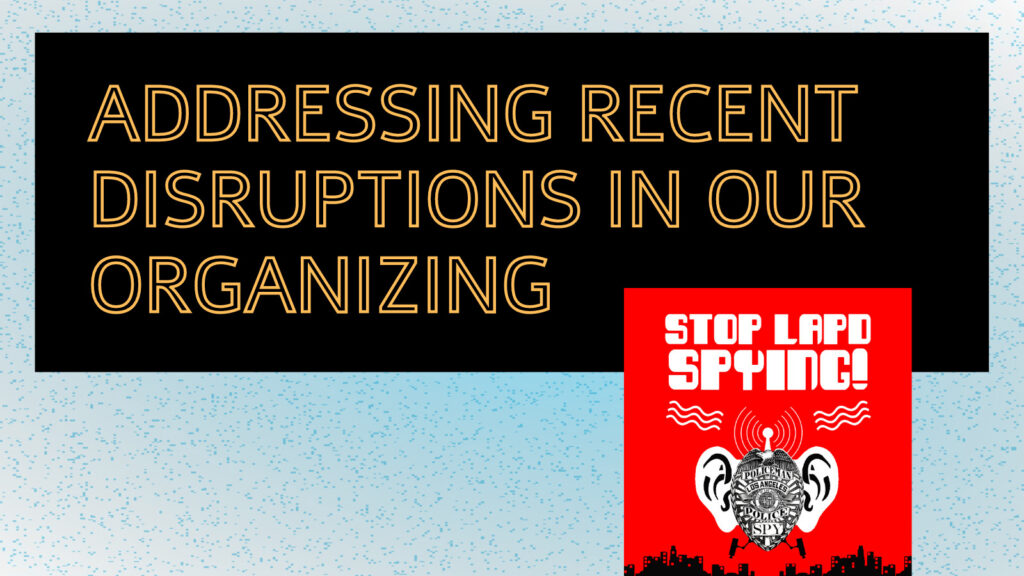 Addressing Recent Disruptions in Our Organizing

The Stop LAPD Spying Coalition works to confront and historicize state repression. That includes programs like COINTELPRO (which stood for Counter Intelligence Program), where the state funded efforts to discredit, derail, and disrupt movement organizing led by Black, brown, Indigenous, and poor people. The history of these programs is often sensationalized, to the point where simply mentioning the history can be dangerous. But referencing this history does not mean we are labeling any person a state agent. Rather, our goal is to address the forms in which the historical functions of COINTELPRO show up around us today.

The forces we are organizing against – cishetero patriarchy, white supremacy, colonialism, and capitalism – can now achieve similar functions without the tactics of the past. Those functions include expanding internal infighting into public spectacles to disrupt and derail organizing, often by tapping into white spectatorship, white fragility, white fear, and white guilt, and this can occur without any role of state agents, state surveillance, or state amplification. At the same time we need to be very clear about what is and isn’t state repression, we also need to name this evolution and the tendencies it depends on.

Over the past month, we’ve watched as the reputations of two of our core organizers General Dogon and Matyos Kidane, as well as our home at the Los Angeles Community Action Network, were publicly dragged through dirt by a predominantly white mob. Both Dogon and Matyos are Black men, and LA CAN is among the boldest and most effective Black-led organizations in Los Angeles. It’s important to note that this episode originated in efforts to confront anti-Blackness within DSA-LA and Streetwatch LA, two largely white organizations. But the public focus shifted overnight to vilifying Black organizers, to the point where white spectators are voicing that LA CAN is “harboring white supremacy.”

It’s important to name how this was able to reach such an absurd point. One, white people have felt entitled to intrude on, adjudicate, and escalate a conflict between Black organizers, weaponizing their supposed “anti-racist” credentials and the identity of the person whose side they chose. This entitlement is white supremacy. And two, anti-Blackness has long made white people very comfortable with treating Black people as threatening, and the history of white mobs weaponizing labels of “toxic masculinity” and “abuser” to target Black men is deadly and racist. We condemn both these tendencies. Their function is to naturalize white supremacy and derail Black-led organizing in the same manner that programs like COINTELPRO did.

None of this means there is no need for accountability within our movements. This includes allegations of exclusion, silencing, and anti-Blackness within DSA-LA and Streetwatch LA, whose members we’ve both worked closely with and criticized over the years. And all of us need to contribute to the internal work of undoing oppression in our own spaces. For our work, this begins with collective conversations that we invite all to join. There is a dangerous history of organizations dismissing gender-based concerns, often dismissed as “not part of the work,” and we must be intentional in creating conversations that disentangle sensationalization from harm experienced by the people most vulnerable to state violence, especially Black femmes. Just as state repression imperils movement organizing and threatens our people, so does patriarchy.

Yet when we see people avoid calls for interpersonal mediation and restoration to instead start shit on the internet, weaponizing anti-Black smears to agitate a largely white base of online spectators, we should name what the function is: disruption and derailment. This is precisely what the state wants, to discredit and neutralize movements for liberation. Our fight back needs to evolve too.

previousFight Against the War on Youth: The Attack On Black Migrants and Political Activism
nextWeekly Update – September 16, 2022